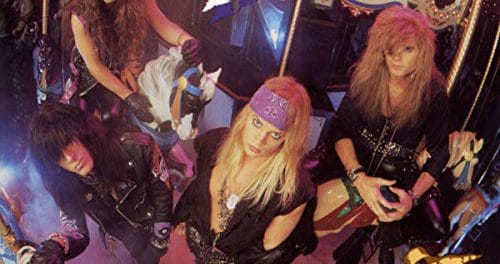 Tuff lead vocalist Stevie Rachelle recently released the 17th instalment of his Tuff Diaries via Metal Sludge, which includes dealing with the advent of grunge, finding a new bass player after Todd Chaisson quit the group, a writing session between KISS bassist Gene Simmons and Tuff band members, and what likely led to Tuff losing their deal with Atlantic Records.

The following is an excerpt (with slight edits) from the 17th instalment of the Tuff Diaries from the Metal Sludge website: 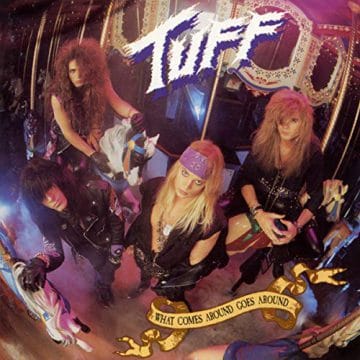 Now that these songs were recorded, we wanted Atlantic to hear them.

But our manager advised us: “Hey guys, there is no rush.”

He mentioned at some point that he would organize it with the label.

But also added that he wanted to be there with us at the meeting.

We wanted to meet with the head guy at Atlantic, who was Jason Flom.

Flom was based in New York City, and we heard he was coming to Los Angeles and we pressed our manager (Brian Kushner) for us to meet up with him.

Again, Kushner wanted to be there with us but couldn’t be in L.A. at the same time as Flom.

So, he was adamant not to do it without him.

However, if Flom was going to be in L.A., we wanted to meet with him.

Kushner also reminded us that Tuff was on salary from the label into the summer.

In short he told us, “Atlantic is paying you. They paid for your demo. There is no reason to rush a meeting, wait for the right time and I should be present as well.”

Against our manager’s advice a meeting was arranged with Jason Flom and a younger (West Coast) A&R guy named Kevin Williamson.

We should have known better than to have a meeting on the 13th.

I recall Jorge, Michael and I all going to the Sunset Boulevard offices and waiting in the lobby.

We had been there before, numerous times but today we were there to play the head honcho our new songs.

We walked in and I could immediately sense it was a bit, hmmm, shall I say cold.

A secretary came and retrieved us from the waiting area and took us to Kevin’s office.

Kevin was behind his desk, and Jason was sitting in a chair off to the side.

The guys both greeted us with a hand-shake and a brief hello.

After a little chit-chat, Jason says: “I hear you have some new music?”

We were happy to inform him that we did, and Michael handed over a tape.

For anyone under 35 reading this, back in the day it was all on cassette tapes as there were no digital files at this point.

Jason motions to Kevin and gives him a signal to cue up the tape.

The song starts to play, and I am not sure what was first, but my guess it was probably “Rattle My Bones”.

The song played through the verse and first chorus and Flom nodded to Williamson.

Kevin reaches over and pauses the tape.

“Sounds like you guys have gotten heavier” says Flom.

Without any hesitation: “Yeah, we wanted to go heavier. More metal, like Skid Row did with “Slave To The Grind.”

Flom immediately says something like: “You know their debut has sold past triple platinum with those ballads, the follow-up sold a million and change.”

He didn’t seem thrilled with our heavier sound.

He motioned to Kevin to go to the next song.

The next track to play was “Better off Dead.”

For anyone who doesn’t know, this song was a darker ballad, think Alice Cooper meets Alice in Chains.

The song plays through a verse and chorus and Flom nods again and Williamson stops the tape once more.

We’re kind of looking at each other realizing we’ve just received a second strike.

Flom continues: “Are we going to be looking at lawsuits from kid’s parents, after their kids kill themselves hearing the song and thinking it was better, being Better off Dead?”

Of course again, I speak up to explain; “It’s like an Ozzy ballad, kind of dark” blah, blah, blah.

We talk a few moments about the songs, and he doesn’t exactly seem happy with what he’s heard.

At some point, Jason tells us about a new band they are going to push, called Stone Temple Pilots.

Kevin puts on a tape and plays us some of the STP songs.

Flom then suggests, “I think you should work with David Prater.”

“He produced the FireHouse record” Flom tells us.

“Nah, we don’t want to be a pop band, we want to be heavier” says Mr. Wonderful.

That was more of me, stupid me talking out of my ass.

I could have openly agreed with whatever Jason suggested or even replied with something like: “That would be great. We’d love to meet David, and see what we can come up with”

Instead, I say something stupid.

I mean, really… was I being honest, or just plain stupid?

I will go with stupid.

I had never met David Prater, and regardless of how much I liked FireHouse or not… it’s just stupid the way I replied to his suggestion.

My thought looking back, and very soon after this meeting is that we (I) did not do, or say the correct things.

Not to throw Jorge under the bus, but he was useless in most of these meetings anyway.

Jorge was a burn out.

It was like having one half of Cheech & Chong with us.

I mean, on stage, with his guitar on… he was great and in reality, an underrated player in my opinion.

But he lacked any business sense and was probably high during the meeting.

However it wasn’t Jorge who spoke out, or said stupid shit at this meeting.

That was all on me.

Michael was clearly more mature, and the smarter guy.

Michael usually led the way in almost everything we did, and almost always handled it well.

I would like to think I added to his delivery, but at times – admittedly, I did not handle it well.

I was very likely comparable to Sebastian Bach.

Too much “dude” or “bro” in my delivery.

I was a loud mouth, who looked the part but often, I am sure I said the wrong things.

I am sure I annoyed (the more important) people over time.

Remember, I wasn’t being interviewed by a dizzy 21 year old blond from a radio station.

Nope, this was the guy who signed checks for bands to make half-million dollar records, shoot 6-figure videos, and bought the priority artists onto radio airwaves and tour stages across the nation.

So me saying, “No bro, we wanna rock” pretty much confirmed I was a douche and he was likely over it.

I recall Flom being at a show of ours in New York City on the “What Comes Around Goes Around” tour, and I shit the bed that night too.

He was backstage post show and was in our dressing room.

At some point, I asked him, “How’d you like the show?”

“It was great, but you talk too much” was his reply.

I then told him, that what I did was like what David Lee Roth did.

He didn’t flinch, “You’re nothing like David Lee Roth” with a stone face.

Now it’s 6 months later and I am sitting in an executive office in Hollywood telling him why we should be heavy when he suggested otherwise.

Flom is giving Williamson the look (which in thinking back was his, “F#ck these guys” look) as we all continued chatting.

After what was likely about 15-20 minutes time, the meeting was over.

Jason and Kevin both shook our hands and we left the Atlantic Records offices.

As we are waiting for the elevator, I remember the band Testament was getting out of an elevator next to ours.

We nodded at them, as they headed in to the Atlantic offices next.

Guessing they were there for a meeting with the boss from NYC as well.

I also remember standing in the elevator with Michael and Jorge, and I mocked the band that Jason and Kevin had just played us.

“What is Stone Pimple Pigeons?” as I joked about their name.

I have no idea… but I did think their name was stupid.

Atlantic released their debut later that fall in 1992 and as history shows, they sold a lot.

How many sold you may ask?

We took the elevator down to the parking structure and drove home to the San Fernando Valley.

The Very Next Day

Michael gets a call from our manager, who was based out in the Tri-State area.

That call informed Michael, some news none of us expected – and that was that Atlantic Records had dropped Tuff.

We should have listened to our manager. But we didn’t.

Kushner informed Michael that he had talked to Flom, and the label is letting us go.

There was no reason that I recall, but clearly it didn’t matter anyway.

Was it our heavy sound?

Was it our songs, or lack thereof, or their quality?

Was it the way I acted, or implied working with David Prater wasn’t of interest?

Or a combination of all the above and adding the “But I am like David Lee Roth…” drivel.

This is why a band has a manager, especially in select situations.

Our manager told us, “You guys are on salary. Atlantic is paying you, monthly. They just paid for the 1st round of demos. There is no rush.”

But none of us, not I, not Michael or Jorge listened.

What a present huh?

They saw the writing on the wall and Stone Temple Pilots was their future, not Tuff.

Now what, we’re back to handing out flyers?

Editor’s note: What is really notable about the 17th instalment of the Tuff Diaries is that Tuff frontman Stevie Rachelle takes responsibility for losing the band’s deal with Atlantic Records. Rachelle could have easily spun the story in a different way but he goes to great lengths to show how his immaturity and quick tongue at the time and during an important meeting likely led Atlantic Records to drop Tuff exactly one year after releasing the group’s debut album What Comes Around Goes Around.