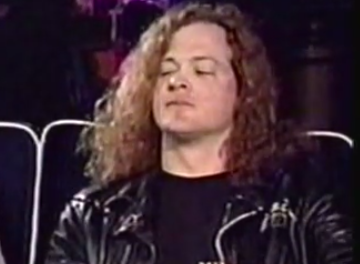 Success often goes to many people’s heads but it appears that one such person is not former Metallica bassist Jason Newsted.

Tuff lead vocalist Stevie Rachelle recently released the 15th instalment of his Tuff Diaries via Metal Sludge which includes the amazing feeling of Tuff‘s breakthrough single “I Hate Kissing You Goodbye” debuting in prime time on MTV, the rise of grunge music and Newsted not letting success get to his head.

With respect to the latter, the following is an excerpt from the 15th instalment of the Tuff Diaries from the Metal Sludge website (with slight edits):

“And Justice For Tuff. 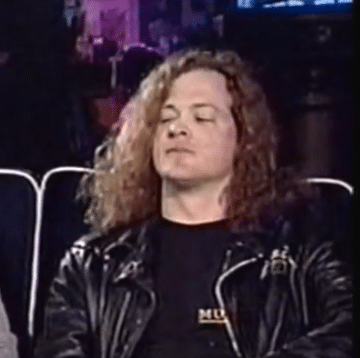 We had finally got our deal and one of the band’s oldest friends seemed genuinely happy for us.

That friend, was Jason Newsted of Metallica.

I had made a few comments in earlier Tuff Diaries and to refresh Jason was originally from Michigan but ended up living in Phoenix in the early 80’s after a failed attempt to get to California.

Tuff was originally from Phoenix as well, and Jorge at some point jammed with Jason in an early version of some garage jam project pre-Flotsam And Jetsam called Metal Beast.

Jason would come to various Tuff shows over the years, especially when we played the Bay Area, like “The Stone” in San Francisco or “The Omni” in Oakland.

He would also reach out whenever in Los Angeles recording or on tour.

Newkid as he was nicknamed by Metallica, was always very cool to us.

Including giving us tickets and passes to Metallica shows at The Great Western Forum or events like a secret show at Troubadour.

One day Jason invited Jorge and I down to the One-On-One Studios in North Hollywood where they recorded their “Black”album.

That day Jason let us hear some random mixes and then we played pool and darts.

They had a dart board with pictures of Nelson and Winger on it as seen in the “Nothing Else Matters” video.

Jason joked: “Stevie, maybe you’ll make the dart board someday” as he threw a dart.

I recall one night Jason came over to our North Hollywood apartment, the Tuff Muff Mansion as we called it.

He was in a rental car, and we drove around the neighborhood knocking over garbage cans, and driving over people’s front terrace (lawn).

Kind of like something you’d see on MTV’s Jackass.

I remember someone asking him: “What about your car?”

Jason laughed out loud: “It’s a rental” as he plowed over more garbage cans.

Some of this footage is actually in the early Tuff Home Videos Part 1 & 2.

Of course, this is pretty immature for any of us to do, but we were all in our 20’s and just being kids.

In looking back, it’s interesting knowing that a member of Metallica was hanging around us at the height of their success and in reality, Jason was just 1 of the guys.

Another reality was, he was soon to be a multi-millionaire.

Sure he was rich, and famous in the Heavy Metal world, but nothing compared to what was about to happen for Metallica.

The very week Tuff was on Dial MTV, their “Enter Sandman” video would debut, and that “Black” release would go on to sell more than 30 million copies world-wide.

This really shows that even though he was in this huge band, and a thrash band at that, Jason never did lose touch with his glam rock buddies from Phoenix.

I recall having pit passes at The Great Western Forum when Metallica played their 5 nights.

Jason looked down at me between songs and blew his nose into a towel.

He then gestured to give me that towel but I declined with a middle finger as he smiled.

Kudos to Newsted for being real to us all those years regardless of his status.”

Before Metallica, he was a member of Flotsam and Jetsam. After Metallica, he has been involved with Echobrain, Ozzy Osbourne, Voivod, and led the band Newsted from 2012 to 2014. With Voivod, he used the pseudonym Jasonic, which is also the name of his music publishing company. He is also the founder of the Chophouse Records studio and label based in California. Newsted lives in Walnut Creek, California.”