Tuff lead vocalist Stevie Rachelle recently released the 17th instalment of his Tuff Diaries via Metal Sludge, which includes dealing with the advent of grunge, finding a new bass player after Todd Chaisson quit the group, and much more.

The following is an excerpt (with slight edits) from the 17th instalment of the Tuff Diaries from the Metal Sludge website with Rachelle‘s recollection of a Tuff writing session with the one and only, Gene Simmons of KISS, in early 1992: 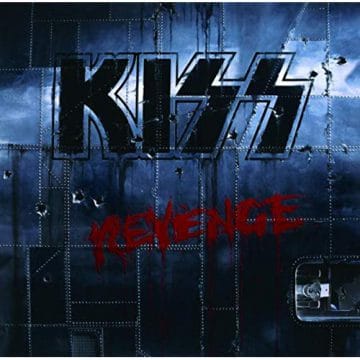 Somewhere along the line in early 1992 we were given the opportunity to write with Gene Simmons of Kiss.

We had met Gene multiple times over the years and he was always very cool to us.

I talked about Gene in a few of the previous Tuff Diaries and again, he was always good to us.

While we were rehearsing at Studio D in Burbank, Kiss was ironically in the big room there as well around this same time.

So we had run into and chatted to both Gene and Paul more than once.

Eric Carr had just died in late 1991 and the band was rehearsing the “Revenge” album with Bruce Kulick and their new drummer Eric Singer of Badlands.

At some point, Michael makes a few calls and arranges us our co-writing session with The Demon.

We are invited to his house up on Mulholland Drive.

Its mid-afternoon and we arrive at the gate and buzz the intercom, “Hello?” says a deep voice.

“Hi, it’s the guys from Tuff for Gene.

The reply: “Come up the driveway, I am in the guest house, it’s on the left. Please park next to the black Ranger Rover” as the big steel gate begins to open.

As we’re parking the guest house door opens and Gene is waving us in.

We walk in and it appears this is Gene’s office.

A big desk, and the room is full of Kiss stuff. I mean, everywhere, everything is Kiss.

Behind his desk, on the wall is a massive multi-platinum mega plaque.

There are magazine stands, like you see in a store, but every magazine had Kiss on the cover.

After we gaze around the room a bit he asks if we want something to drink.

We say “sure” and he gives us a typical Gene look, “Well, go help yourself” as he points to the kitchenette area.

The fridge is full of cheap soda, like a West Coast style Jolly Good or Faygo brand, all flavors.

I grab the only beer I drink, Root Beer.

I vividly remember Pantera being on and Gene watching intently.

We settle in and Jorge starts throwing around some riffs, and Michael is shaking a shaker.

We’re dicking around a while and soon we see another SUV style truck pull up.

Gene pauses and is now staring out the window with a huge smile on his face.

It appears it’s a young woman – perhaps a Nanny – and a little boy.

The little kid is dressed in some glittery costume looking thing.

I see it, and immediately say: “Who is that, and what the hell is he wearing?”

Gene is shocked, and looks at me: “Why that’s my son, in his costume.”

Of course I had kind of figured this, but the second part of my joke hadn’t been delivered yet.

I just shake my head and tell Gene; “Oh for Christ’s sake, I thought he was wearing something from the Destroyer Tour.”

Gene’s shocked face immediately gives me the “You got me look” and he shoots me a half smirk.

As most know, Gene is always the one giving people the business, advice, and being the king of the room.

But I had to make a stand, and try and one-up The Demon with something fun.

And I think it worked, Gene was always so nice to me.

So we’re back to jamming this song, and we called it “One Way Hell Ride.”

I am pretty sure that was Michael’s title, and who knows, maybe he was referring to that last van trip with us last December when I attacked Jorge on the way to Salt Lake City.

Apparently I can be a handful at times, and this is why our old manager Howie Hubberman nicknamed me, Rachelle From Hell.

I can be your best friend, and I guess at times, your worst nightmare.

So, Gene is strumming, Michael is keeping the beat and Jorge is riffing over the rhythm.

Jorge was also tapping his foot and keeping time.

Tapping his foot right into his can of grape soda, which he proceeded to knock over.

Now the 3 of them are in full swing.

I look down and watch a small lagoon of purple soda forming on Gene’s light colored carpeting.

My face starts contorting and I am waving my hands and gesturing for them to stop playing, Gene looks at me like “Huh?”

I look to the floor and he calmly rolls his eyes, then points towards the kitchenette again:

I then clean up the grape soda as the guys run through “One Way Hell Ride” some more.

Our afternoon at Gene’s place was awesome.

He could not have been more accomodating, very down to earth and he was basically 1 of the guys.

Well, except we were in Tuff and he was in Kiss.

If that wasn’t awesome and cool, imagine this next bit.

So a few weeks later we’re back to Studio D, where Tuff rehearses and Kiss was rehearsing as well.

One day we’re in our small lockout room and Gene arrives before the Kiss session.

We see him in the hall and he peaks his head in our room.

We’re set up and Gene asks; “Did you work on that song anymore?”

Before we know it, Gene comes in, picks up the bass, and summons the guys to jam.

Now I sit and watch Michael and Jorge rehearing with Gene Simmons of Kiss.

Gene took command of the room, “Jorge, turn that amp up, and face the cabinet towards me.”

“Michael, shorten that fill, real steady, 4 on the floor” barks Gene as the guys begin.

Too bad the iPhone wasn’t around in early 1992.

There is more about Gene, but I’ll save that for later.

No matter what anyone has said or thinks, The Demon has always been amazing to our band.

However for the record, he did not offer us any of the left-over cold pizza.”