Tuff lead vocalist Stevie Rachelle recently released the 15th instalment of his Tuff Diaries via Metal Sludge which includes the amazing feeling of Tuff‘s breakthrough single “I Hate Kissing You Goodbye” debuting in prime time on MTV, the rise of grunge music, Metallica bassist Jason Newsted not letting success get to his head, and Tuff having to suddenly switch from a tour bus to a cube van when their tour support was cut during their first full tour of the United States of America.

The following is an excerpt from the 15th instalment of the Tuff Diaries from the Metal Sludge website (with slight edits):

We’re in a tour bus and on our way across the United States of America.

It’s late August and this is really nothing totally new to us as we’ve toured through the Midwest, Texas and the West Coast several times.

Also, it wasn’t our first tour in a bus either.

But the big difference now was, we were signed to Atlantic Records and on MTV.

Pulling into Kansas City, St. Louis, Milwaukee and Chicago, this was all a “been there, done that” for Tuff.

However, about 3 weeks into the tour we started hitting places we had not previously played, like; Cleveland, Cincinnati, Detroit, Philadelphia, Boston, New York, Baltimore and dozens of other East Coast cities.

The feeling was awesome and having fans know us, know our songs, want our autograph and a picture, well… it was all beyond amazing.

Again, we had done all this, many times before, but going into cities you had never been to was a totally different vibe.

We knew we had fans in California, Arizona, Utah and Texas but going somewhere totally new, and having a surge of NEW fans, NEW friends and NEW pussy… you get the idea – it was incredible.

On a daily basis you pull into town, in a tour bus no less, and when you exit that bus door – it’s almost a guarantee there are fans waiting for you.

Whether it’s at a motel, the club, the radio station or the local record store.

And for a band like Tuff, at this point… the number of young girls that were being thrown at you was indescribable.

Our pictures are in the rock magazines, our CD is in the record store and our song is on the radio.

And, we had also hit the jackpot, as our video was on MTV.

MTV is like the magazines, the music stores and radio stations all rolled into one. 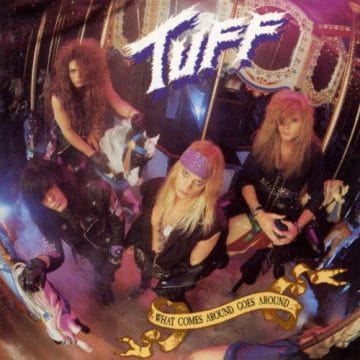 All fans… both girls and guys are waiting for that magical day.

The concert date, be it at a local club, a theatre, the arena or other.

Even at the club level, for an 80’s hairband like Tuff… with pictures in most rock magazines, our song on the radio and the video on MTV… it was like a license to kill.

I can recall lines of young fans outside the venues as we did sound-check.

We would always go talk to fans, hang out, and more.

I can vividly recall talking to many girls, “Hey, wanna come on the bus?”

“Sure” was the immediate answer 9 out of 10 times.

“Just you though, our road manager doesn’t want a bunch of…”

As she cuts me off: “I understand” awaiting me to take her hand.

We’re now walking to the bus, she’s beaming with pride and I am thinking about 1 thing and 1 thing only.

Not trying to be mean here, and sure my mind is in a different place as an adult.

But the truth is, all bands did this.

How many times did I do this with some girl I knew for 10 minutes?

Dozens and dozens, maybe even hundreds of times.

But crazy as that seems, or was… I am still friends with so many people I met like this.

The way young people think, in their 20’s or teens… well, we know how we thought.

Looking back I had some of the most amazing times and I wouldn’t change any of it.

Well, except for this part.

We’re about a month into our U.S. Tour, and our label informs us they are cutting our tour support.

What does this mean?

It means we have to give up the tour bus and now finish the tour in a van.

We were just #3 on MTV a few weeks ago, and now we’re losing our bus?

Yup… and the call came in one day, and a few days later it happened.

We were on the East Coast, and told by our tour manager: “Tomorrow the Bus ride is over, tonight after the show take ALL of your stuff out of your bunk and put it in your Motel room.”

The next morning I woke up and looked out the window as the white passenger van was parked next to our big amazing tour bus.

I watched as the road crew unloaded our equipment from the underside storage area of the bus, which they transferred into a Ryder truck.

Tuff‘s “The All New Generation” video: