The stage for the 20th instalment of the Tuff Diaries is the start of 1994 when the group is looking to release its follow up album to its successful Atlantic Records debut album What Comes Around Goes Around (1991). Rachelle indicates (with slight edits):

“Our first record was out in May 1991, just 4 months before Nirvana’s, and while our video peaked at #3 on MTV, that band from Seattle entered the countdown that same week. That Seattle scene decimated our Hollywood scene, and well… not hating here, but it’s factual and history shows, that when Grunge arrived, Glam was ushered into the gas chamber.

Now a handful of years later, we’re signed to a new deal, and within the same week that Cobain took his own life, our new label also suddenly died leaving us label-less once again.

We signed this deal with Grand Slamm Records in the fall of 1993 and Brian McEvoy was the President of the label.

A little history, previously Grand Slamm had released a record from White Lion, which helped them get their Atlantic Records deal.

Oddly, it was the other way around for us.

We were rebounding from being dropped by Atlantic, and McEvoy signed Tuff to his label.

In truth, he basically bought the rights to release our (newer) material, which had already been recorded for Atlantic.

These were songs we demo’d for our follow-up on Atlantic’s dime…but after they dropped us…we were free to shop around for a new deal and they allowed us to take our masters with us.

Well, they didn’t tell us we could, we just took them.

I don’t think they cared regardless, as we were old news.

With those masters, at some point we signed a deal with Grand Slamm who had distribution through I.R.S. Records.

Basically, we sold them (him) the rights to license and release these songs for $7,500.00.

Doesn’t sound like much money, but the sessions were done, and already paid for, so this was kind of free money for the band.

And by comparison, when we signed to Atlantic Records, there was no advance for the band per-se.

That was over roughly 3 months time, with pre-production and mixing.

So, we made more money in our pockets off the Grand Slamm deal than we made with the Atlantic deal. Lol.

Of course the Atlantic deal also financed the recording of “What Comes Around Goes Around” which came in just under $100,000.00 in the end.

Not forgetting the budget for 2 videos, advertisements, tour support and much more.

Fact is, Atlantic Records spent several hundred thousand dollars on Tuff but that is in the past now.

So we sign our deal and are planning things like: the album title, photos, release date, single, etc. 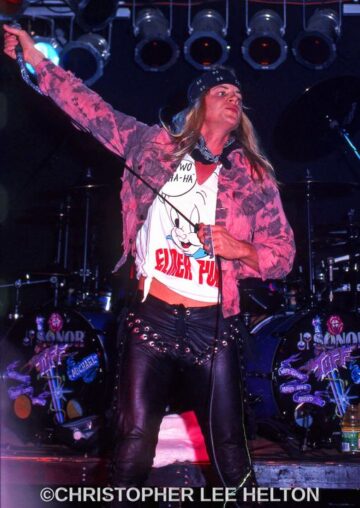 Around this same time bands like Quiet Riot (signed to Moonstone Records releasing “Terrified” in 1993), Warrant (signed to CMC releasing “Ultraphobic” in 1994) and others were all in a similar boat.

Many 80’s bands were all looking for a new home to release their next record after being dropped by their previous record label.

Along the way Tuff met with several of these labels, including Moonstone and CMC as well.

But we settled on signing with McEvoy at Grand Slamm.

However, to be honest, McEvoy at times was very distant.

We’d have a chat, talk about things, and make plans and then nothing for weeks at a time.

Of course at this point, weeks turned to months and we were wondering: “WTF!”

I recall having some slightly heated phone calls with McEvoy and looking back, he probably thought I was a nightmare to deal with.

But hey, I wasn’t the stereo-typical lead singer either, I was the band’s Gene Simmons at this point, and had my manager, or even attorney hat on.

I wanted what was best for Tuff.

Grunge had fully settled in as bands like Stone Temple Pilots (Atlantic), Nirvana (Geffen) and Pearl Jam (Epic) were topping all the charts.

Regardless of what was happening with Grunge, we just wanted to release our follow up record.

“What Comes Around Goes Around” was released in the spring of 1991, and for the most part we had been playing half of that record for years previously.

So…these newer songs that were supposed to be on I.R.S./Grand Slamm Records we wanted it out there, as they were recorded in early 1992 and it was late 1993 when we signed with them.

Figuring for an early 1994 release, these tunes would already be roughly 2 years old.

Atlantic Records dumped us into their garbage bin in the spring of 1992, and in reality, the day we got dropped was May 14th 1992.

Note: Our debut release “What Comes Around Goes Around” hit the streets on May 14th 1991.

So…yeah Atlantic Records celebrated our 1 year anniversary by dropping us.

With that 5k we went to Cornerstone Studios in Chatsworth California and recorded 7 songs. Along with me (vocals), Jorge (guitars) and Michael (drums), we had Robbie Crane rehearsing and recording with us.

Crane in fact was the likely candidate to replace Todd Chaisson on bass, but luckily for Crane, he was offered a little better option and took it.

Playing in the Vince Neil Band with Steve Stevens, Phil Soussan and Vikki Foxx was obviously the much better gig.

Speaking of, Vince Neil did some of his tracks at Cornerstone Studios for the “Carved In Stone” release as well.

So we worked up new songs (while still signed to Atlantic) and went and recorded them.

Those included: “In Dogs We Trust”, “God Bless This Mess”, “Better Off Dead”, “Rattle My Bones”, “Electric Church”, “Simon Says” and a song called “Chemical Man”. 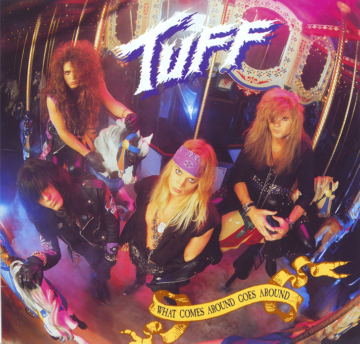 There was also an 8th song called “One Way Hell Ride” that we co-wrote with Gene Simmons but unfortunately we never recorded that.

I have some rehearsal tapes, and a few writing session tapes (with Gene) still lying around.

Anyway, these were Atlantic Records tracks, but we had also recorded a few other tunes during late 1992 and into 1993.

There were a few songs we did with Producer Randy Cantor.

Cantor was based on the East Coast and had most notably worked with Bon Jovi and Lita Ford.

Cantor and his writer friend Michael Caruso also submitted “I Like What I See” to Tuff as a song for us to consider recording.

It was more Cheap Trick than hair metal, but I sang the song and it came out great.

We then worked with the duo of Cantor and Caruso and wrote the song “Tied to the Bells” which came out even better.

Add in a cover tune, our version of “Sixteen Tons” by Tennessee Ernie Ford, and we had 9 songs in the can.

This for what it’s worth, was suppose to be our follow-up on Atlantic Records but when they canned us, we were homeless.

It was all of that, which lead us to signing with Grand Slamm / I.R.S. Records.

ANOTHER ONE BITES THE DUST!

As I.R.S. Records imploded, so did our distribution for Grand Slamm.

I recall hearing from our manager (Brian Kushner) at some point that Brian McEvoy was offered a job at a label, like Polygram or something similar, so he took that job and Grand Slamm seemed to be over at that point.

It might be safe to say, that he kind of gave up on running his own label, in favor of a much more secure major label salary and job.

In looking back, I don’t blame him.

But let me say, that in our contract with Grand Slamm, there was a clause that they had to release the record within 180 days of us turning over the masters.

Because of the developments of both I.R.S. and Grand Slamm, it became clear that our record was not coming out on either, so… due to breach of that agreement, the masters reverted to us.

I.R.S. Records had big success with bands like; The Go-Go’s, Concrete Blonde, Gary Numan, Oingo Boing, Wall of Voodoo, R.E.M. and others, but obviously none of this mattered in 1994. 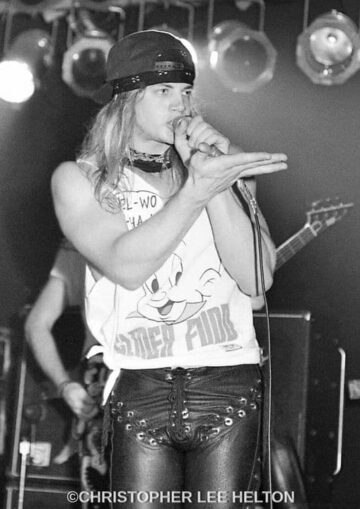 I immediately told myself: “F#@k this… I am not waiting for another label, I am doing this myself.”

I was beyond pissed.

All that time, waiting, wondering, and now we’re back to square one.

Upon learning that our 2nd record deal was no longer of any use to us, I immediately started to research with my cousin Keith, what we needed to do to self-release this music.

We grabbed a copy of Music Connection magazine and started looking for a mastering engineer, a graphic design artist, a replication plant to make cassettes and CDs among other things.

Also, I needed a UPC (Universal Product Code) number, to make barcodes for the cassette, CD and any other future products be it a DVD, Vinyl or swag.

One other thing I needed was a record label name.

That’s right, I am officially forming my own record label, and I wanted to do everything a major record label would do, only on a smaller level.

So, if it’s my own record label, then I get to name it as well and I did.

I came up with RLS Records.

And RLS had a dual meaning.

First off, I was so sick of record labels, and at this point felt they all sucked.

So, I decided to call my label, RLS Records, which stood for Records Labels Suck Records.

But I also gave it another meaning, the RLS also stood for Rachelle’s Lyrics and Songs.

After all, these were at this point, mainly my lyrics and songs, so RLS it is.

We found a great mastering engineer named Paul Tavenner from Man Alive Music who is a genius in the studio, a real studio wizard if you will.

Paul also referred a graphic artist named Monique, who was awesome too.

It was sometime in mid April that I had a yellow legal pad, and made a list of everything I would need, to form and start RLS Records.

The sheet of paper had about 2-3 dozen things on it, and as I accomplished them, or they were finished, I would cross them out.

Little by little, things started to fall into place.

Mastering session, for both CD and Cassette (it’s a different process for each) and artwork for both as well.

And again, the artwork has to be laid out one way for CD and another way for the Cassette.

It all sounds simple, and basic, but there are countless little details that have to be considered and organized to make it sound, look and present itself as a professional product.

I have to say, without my cousin Keith, I would have been even more stressed, but Key Money (his nickname) did a lot with and for me.

In a nutshell, if I was Rick Rubin, Keith was George Drakoulias, or I was Batman, and he was Robin.

He permeated into everything I (we) did, meaning Tuff as well.

Keith also helped me get product in stores, acted as a publicist to secure press and interviews for magazines and ultimately was our tour manager.

It’s not far-fetched to say that Keith helped me co-manage the band, the brand and the label.

Keith also had a great work ethic, only he was way even more organized than I ever was and super detailed too.

Hard work pays off, and if you really put your mind to something, it can be achieved.

When I flew to Wisconsin the 1st week of April, we were still on Grand Slamm Records, and awaiting their next move.

You can read the rest of the 20th instalment of the Tuff Diaries at Metal Sludge‘s website.