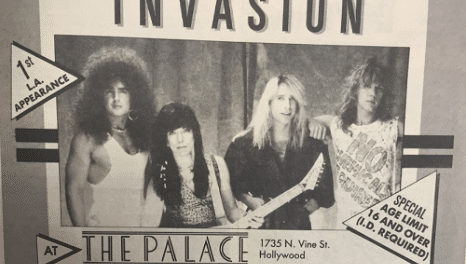 Tuff singer and Metal Sludge principal Stevie Rachelle continues to share his story via a series of articles on Metal Sludge called the Tuff Diaries and is now on his sixth instalment and recalled an odd moment as Tuff were slated as the main opener for Vinnie Vincent Invasion at The Palace in Hollywood, California on August 24, 1988.

“It’s now late August and Tuff are picked to support Vinnie Vincent Invasion at The Palace. 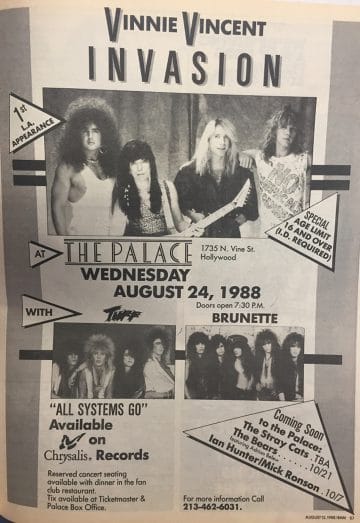 This place is now called Avalon and has a capacity of 1,500.

It’s located just off of Hollywood and Vine, across from Capitol Records.

It’s also the same place that Poison shot their video for “Cry Tough”.

Another cool fact, the punk band The Ramones played their 2,263rd and final show here on August 6, 1996.

Full page BAM advertisement from August 1988 for the Vinnie Vincent Invasion show at The Palace. Note they used an old photo of Tuff with Jim Gillette.

The bill is a 3 band lineup and local hair farmers Brunette are the 1st slot band.

Their hype was they had 15 feet of real hair.

Even though the drummer wore hair extensions, the others did have hair to their ass.

But if we’re being legit, it was more like 12 feet of real hair and 3 feet of phony ass hair extensions. Lol.

Hey, I ain’t bagging, just saying. I was rocking extensions too.

The day of the show comes and we’re at sound check.

At some point we arrive and Vinnie Vincent is alone on the stage, for like an hour.

All by himself, ripping riffs and soloing at maximum volume.

But no other band members were on stage.

Something seemed odd, even though we didn’t know for sure.

Vinnie is finally done and leaves.

Now Mark, Dana and Bobby Rock show up and take the stage.

Mark is playing guitar and singing and they sound check like a normal band.

Later we would learn that there had been on-going issues and drama between Vinnie and the others.

Well something was wrong as their very next show would be their last.

August 26th at “Celebrity Theatre” in Anaheim California was the end of the Vinnie Vincent Invasion.”