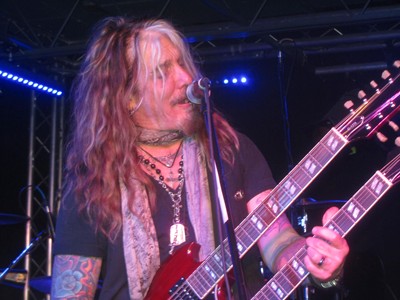 Tuff frontman and Metal Sludge principal Stevie Rachelle asked an interesting question today via one of his Facebook accounts regarding which eight out of ten musicians played guitar in Tuff and the singer then provided some information in there comments section about when some of those guitarists actually played in the band.

Tuff has had a bunch of Lead Guitarists perform Live with us over the last 20+ years.

Which 2 guys Never played Guitar for Tuff at a Live show?

Rachelle provided the information below with respect to when some of the musicians that played guitar for Tuff.

John Corabi (The Scream, Union, ex-Ratt, ex-Mötley Crüe, ex-The Dead Daisies) — One show in Las Vegas, Nevada, USA as a last minute fill in during the summer / fall of 2001

Howie Simon — Several shows including in Oklahoma, Texas and California in about 2017/18