Tuff frontman Stevie Rachelle has just released the 19th instalment of his 25-part Tuff Diaries via the Metal Sludge website. This time, Rachelle covered an entire year (1993) during which Tuff were looking for a new record label after releasing their debut full-length studio album What Comes Around Goes Around (1991) via Atlantic Records. Rachelle stated (with slight edits):

At some point after a year or more of meeting with record labels, demo’ing more songs and sorting through the options, we finally signed a deal. 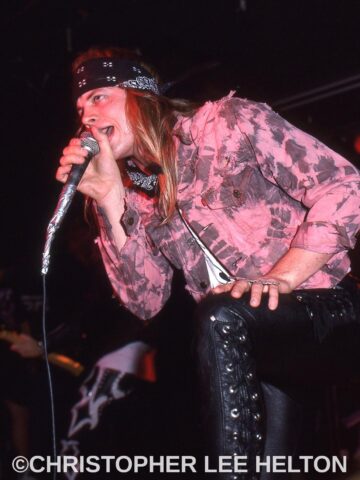 Well, if you want to call it that.

Brian McEvoy was the President of Grand Slamm Records, and he wanted to sign Tuff.

In a nutshell, what we were offering (to them) was our previously recorded Atlantic Records demos for album number 2, as our next release.

A few labels showed interest, but no one really made any solid offers.

After some back n’ forth, we were starting to realize we didn’t have a lot to choose from, and the very low offer from Grand Slamm Records was really the only one on the table.

It was exactly 10% of what we signed our original deal for.

That was what we signed for and Grand Slamm who was at this time a subsidiary of I.R.S. Records.

First off the recording was already done, paid for, mostly by Atlantic, and this money was just our advance if you will.

Of course that’s not much of an advance, but our goal was to have it released by a label, and even though it wasn’t Warner Brothers, Geffen or Capitol, I.R.S. was considered a major label.

Over their history, I.R.S. Records was behind some big records by bands like; REM, The Go-Go’s, Concrete Blonde, Oingo Boingo and Timbuk3 to name a few.

We also knew, that they knew in order to push us, and possibly move units, they would have to put in some money for advertising, and perhaps a video and maybe some tour support.

So with the small advance that they gave us, well, it left other monies to be used in the way of promoting the new Tuff record, or so we thought.

Michael [Lean] even though he had essentially just left the band, had wanted to call the release “Sacrilegious” and had an idea for an old wooden rocking chair on the cover.

I recall arguing with him about this, and felt the idea was something that Counting Crows or Stone Temple Pilots would have used.

Of course I knew that 4 guys with big hair wearing leather pants, headbands and bullet belts wouldn’t work either, but I was trying to remain somewhere in the middle.

One thing I recall happening in the late summer, as this fall tour approached, the label President Brian McEvoy did not want us to tour.

He was adamant, we stay home, and wait to tour the following year once the record was released.

I argued with him on the phone, so much so, at some point he stopped taking my calls.

I recall me saying something along the lines of: “You worry about the record, its release and promoting us… we’re not staying home the entire year while we wait on you or the label to do your part.”

I am pretty sure he at some point realized I was a bit of a nightmare to deal with.

I was no stranger to this game, and knew which side my bread was buttered on.

When we played shows, we made money.

It helped us pay for our rent, our rehearsals, gear and some money to live off as well.

By this point in our career, if you want to call it that, I was fairly versed enough to know what was best for me, or us, as opposed to others.

Others meaning, the record labels, executives, and some random person in a suit who had never stepped foot into our rehearsal room, apartment or touring van.

So when some guy in New York tells me: “Don’t tour. Stay home. Wait for me to direct you…” and so on, my response was in general: “F#@k off and you do your job, and I’ll do mine.”

Of course that wasn’t my first or exact words, as I would always be open to listen to other’s advice, or direction, and then collectively we would take in what others had said or suggested, and along with our own intuition or knowledge, make a decision best for the band.

In the end, we were going on tour, and I never for 1 second waivered in the plan.

After several phone calls, and faxes… it got a little ugly, as I voiced my opinion and when met with what I perceived as an inadequate reason, as to why we should simply sit home and wait, I vented.

What’s that old saying: “A closed mouth doesn’t get fed”

And us sitting around the Valley for the entire year of 1993, waiting for something to happen, was not going to happen, at least not on my watch.

So, as planned, we booked the tour and went forward ready to put another 40 notches on our belt.

You can read the rest of the 19th edition of the Tuff Diaries at Metal Sludge‘s website.”