Stevie Rachelle shares how he got about $7,000 from Tuff’s $175,000 deals with Atlantic Records and Sony

Tuff lead vocalist Stevie Rachelle recently released the 14th instalment of his Tuff Diaries via Metal Sludge which details the band’s deals with Atlantic Records and Sony as well as recording their debut video. Rachelle reveals the stark realities of how much band members would often actually pocket when signing their “big” deals with record labels and publishing companies back in the late ’80s and early ’90s. 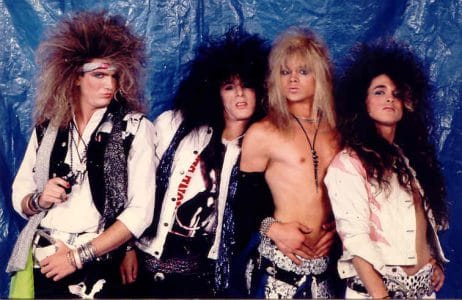 Atlantic Records is now essentially a bank for Tuff.

They are paying for the album, the cover photo shoot, videos, all related promotions and tour support.

Each of these things costs Atlantic a good chunk of money.

But in reality, it’s our money.

Money that they would have to recoup, from them selling our record before we would see anything in the way of profits.

Show us the Money!

So to go along with our record deal Tuff signed a publishing deal and we received a six-figure advance.

This was huge news and it was for more money than our record deal.

This sounds like a lot, but…let me break a few things down for you.

This was the budget allotted, for the band to record the record.

But, in having a manager (Power Star / Brian Kushner) and a lawyer (Schindler & Associates), they are entitled to their cut for helping secure and negotiate that deal.

These are pretty standard fees for their respective positions.

They are entitled to their money, from our 75k record deal.

They also collect from the gross dollar amounts given to us for these deals.

In other words, their money comes off the top.

But, we never paid them out of the initial recording budget.

The recording budget not only used up the full 75k, but we actually went over budget by about 15 grand.

As you can see, if Howard, management and the lawyer all took their cuts. we’d be left with about 30k to record with.

This budget, also included some money, ($600.00 per guy, per month) we were given during pre-production and recording (November, December and January) to pay our rent.

These 2 get their cut, of all of our deals that they help secure.

So, that means they get this % from our publishing deal with Sony as well.

But remember, they never took their cuts of the record deal, as they opted to leave the money in the pot to make a great record, and they would collect later.

There are 4 guys in our band, and we’re all equal partners in Tuff.

But we also have some band bills, like monthly rehearsal space, etc..

We’re going to be rehearsing the new record, getting ready for tour, buying some new road cases and we need that lock-out space to store our gear at, as well as rehearse.

Michael figures some other related band bills and we all agreed to put $7,500.00 in the band account.

Each of us 4 band members got a check for about 8 grand.

I had a few random bills, borrowed monies that I owed management a few bucks.

And let’s not forget we were getting $600.00 a month while recording.

How does that sound?

Signed to Atlantic Records, and pulling in a whopping $150.00 per week.

I am guessing to some these numbers can be shocking.

But to us, we were pretty well versed and knew the drill.

The fantasy of being millionaires, buying mansions or sports cars was never really a part of my thought process.”