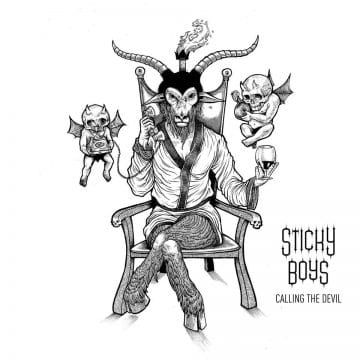 French rockers Sticky Boys have released their first single titled “Better Days” from their upcoming new studio album Calling The Devil, which will be released on January 27, 2017.

“Paris-based band Sticky Boys have been earning their stripes on the road for the past five years, driven by one thing and one thing only: their love for real Rock’n’Roll. Having released an acclaimed debut album in 2012 and recently featured in the movie Oceane (2013), the Gallic rockers have gained a mean reputation as live performers, honing their craft through on-stage collaborations with the likes of Y&T, Crucified Barbara, Electric Mary and Nashville Pussy.

Despite a calendar filled to the brim with live dates all around Europe, the three wild-men unveiled their much-awaited second album in September 2014. “Make Art” is produced by their long-time accomplice Francis Caste, from Studio Ste-Marthe, and will be released on Listenable Records. Never resting, they are now headed straight back for the stage, resuming their incendiary live tour in the autumn.”