German rockers Stinger have released a two-part video for their song “Hard To Believe” from their album Colourblind.

Stinger‘s “Biography” on their website states (with slight edits):

“In today’s times, honest feelings and passion are more in demand than ever. 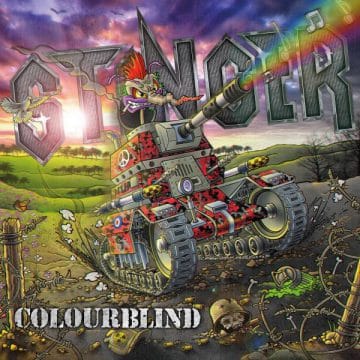 Stinger is a band that values authenticity as their big banner.Here are musicians at the factory writing handmade songs which are raw hard rock thoroughly honest and with a touch of blues.

For their first EP “Mosquito” and the full length album “Disadvantaged“, Stinger brought high-caliber gain to the table. Three former members of AC/DC as well as members of Rose Tattoo, Doro, Dio and Ohrenfeindt did features on these recordings.

The album won the “German Rock & Pop Award” in the category “Hard Rock Album of The Year 2017“. The revenues of the prize-winning album “Disadvantaged” are donated by the band to the parents’ initiative of children with cancer in Nuremberg.

But the boys are going after more. In 2018, they put out the German-speaking single “Volstoff” and scored big time in front of 50,000 rockers at the reissue of the legendary “Werner-Race”. Like a gunboat they fired up two frenetic live performances at this festival which impressed and satisfied their listeners.2019 marks the release of their highly anticipated second full length album “Colourblind“.

These guys are wearing a groove that is going straight to your bones. Stinger does not pay much attention to knick-knack but on the sense of life called Rock ‘N’ Roll.

If you are looking for a band that will thrill rock fans all ages, Stinger will serve you well. There are currently not a lot of bands that both press and fans alike take hold of.”

“Hard To Believe” – from their new album “Colourblind”Part 2: https://www.youtube.com/watch?v=p2_JNf2o2YsRelease: May 10, 2019Boersma Records // Distributed …