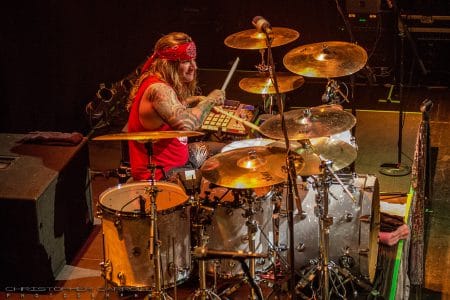 Back in 2011, Steel Panther included a song titled “Just Like Tiger Woods” about renowned golfer Tiger Woods on their second studio album Balls Out. The song continues to be a staple in Steel Panther‘s live set to this day.

In terms of whether a song about current US president Donald Trump is off limits for Steel Panther, Zadinia advised: “[pause] I think we could, if he weren’t a politician, we might have tackled that. I think it was thrown out before and it was shut down pretty quick. It’s too easy to pile on and if we did, even if it was fucking ‘epic’, we’d risk alienating a portion of our audience. We’re a fun band that are here to entertain and make you forget about all the bullshit that’s happening in the world. Tiger Woods is a celebrity/athlete and not a politician. If it were Donald Trump the businessman/reality show star that would be a different story.”

With respect to who produced Steel Panther‘s latest studio album Heavy Metal Rules, which will be released on September 27, 2019, Zadinia indicated: “Yeah, it’s Jay Ruston on this one too! He’s done all our records and at this point, if it’s not broke, don’t fix it! Jay has been with us from the start and we can’t see ourselves working with anyone else. He’s gotten a lot of great gigs producing bands like Anthrax and Stone Sour, now we’re not taking all the credit for that but I do think it’s because people heard what he did with our records and Heavy Metal Rules is no different.

You can read the rest of the interview with Stix Zadinia at KNAC‘s website.