Steel Panther drummer Stix Zadinia was recently interviewed by Mark Rockpit for The Rockpit in advance of the release of the band’s new album Heavy Metal Rules, which will be released on September 27, 2019. 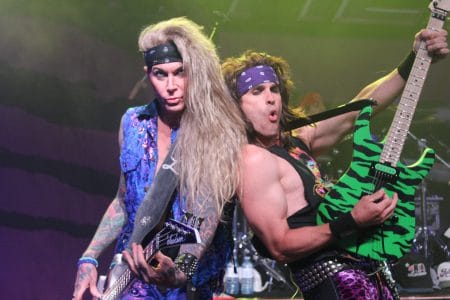 Zadinia was asked whether Steel Panther have ever considered doing a “clean version” of one of their songs by changing the lyrics to make a standard rock song. The drummer replied: “That is a good question, I’ve heard it, and we get that question periodically and the answer is… no. It’s not a “Fuck you” no, to us the songs are what they are and when we sing a song like ‘Fuck Everybody’ for instance there’s no other way to say that and there’s no other way to say “All I Wanna Do Is Fuck (Myself Tonight).”  Oh there are other ways to say it, but it just doesn’t feel the same. To us, we really have prided ourselves on just being super fucking direct, and that’s important to us.”

In terms of how many songs from Heavy Metal Rules will make Steel Panther‘s setlist, Zadinia advised: “… so I just texted my buddy Scott who plays drums for Alter Bridge and I said “hey dude how many new songs do you guys put in the set”, fans don’t really ask about that shit so I thought “why don’t I ask one of my friends – they do this”. So what we’re going to do is play the songs as we release them and so far we have two songs that are out – “All I Wanna Do Is Fuck (Myself Tonight)” and “Always Gonna Be A Ho” so for shows coming up we’re gonna include those two songs and then we have plans to release two more songs before the record comes out. And we will probably include at least one of those, but maybe both of them. I would end up loving to include ‘I’m Not Your Bitch’ in the set and we’re talking about maybe ‘I Ain’t Buying What You’re Selling’ ‘cos it’s like really different for us but I gotta tell ya it’s a fucking hard, hard thing to do – when you have five albums out where’s the balance? How much new shit do you do? Then people wanna hear their favourites and you can’t please everybody so you gotta make decisions, it’s like having a fucking Aussie Rules Football Team – who do you start? Who do you put on the bench?”

You can read the rest of the interview with Stix Zadinia at The Rockpit‘s website.