The group’s YouTube channel states in part: “We can now announce that we will be releasing the sleaze anthem “Death By Metal” from our album G.H.O.S.T this Friday.” 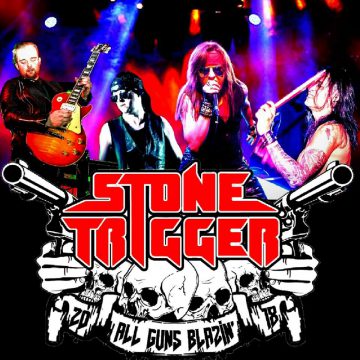 Stone Trigger‘s “Biography” on their Facebook page states in part (with slight edits):

“Stone Trigger formed In Dublin, Ireland in 2009 with the intent to raise the roof with a brand new version of stadium rock. Influenced by the best bands in the business throughout rock n’ roll history, from Motley Crue, AC/DC, Guns N Roses and Alice Cooper to modern day bands like Hardcore Superstar, Airbourne and Crashdiet.

Following support slots with the voice of “Mr Big” “Eric Martin“, Sunset Strip icons “Faster Pussycat“, Motley Crue‘s “John Corabi, guitar legend “Pat McManus” & “The Treatment” amongst others, the Dublin band continue to kick down doors. 2016 has seen the guys headline at Belfast’s “Blazefest VI“, return to the UK to tour with “The Burning Crows” & returned to the UK to pick up a much coveted 3rd place at Sheffield’s “Hard Rock Hell, Highway To Hell Grand Final” & they’re not stopping there, the guys are taking to the road with none other than American rock icons “LA Guns” in March 2017 on an extensive tour of the UK. This period of time also coincides with the band’s 3rd release “G.H.O.S.T” the album.”

Thank you to The New Wave Of Hair Metal on Facebook for recently posting the video.

New Song & Tour Announcement!We can now announce that we will be releasing the sleaze anthem “Death By Metal” from our album G.H.O.S.T this Friday. The rele…