The group’s “Bio” on its website indicates in part: 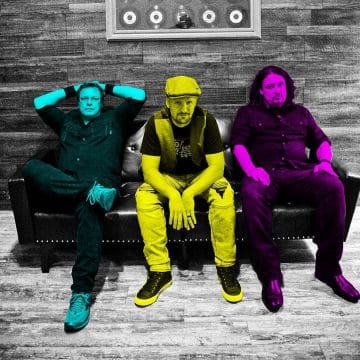 ““It’s all the same to me, what once was will always be.”

These words  taken from StoneRowe’s single “Higher” serve as an ironic introduction to the band that almost never was.

Formed in 2018 by Billy Comfort (vocals/synth), JP Crowley (guitar) and Johnny Lamb (drums), StoneRowe‘s roots can be traced back to a glam metal tribute band the trio helped build into a popular fixture in the Memphis music scene. With it, the guys played hundreds of gigs, honing their live performance chops in front of raucous crowds in settings from intimate dive bars to headline festivals.

And while the rush of the live performance has always been strong with these three, it has never been able to quell the lingering questions of “what if” that became frequent topics of conversation among them during their downtime.

“What if we record our songs?”

“What if we give those songs to the world?”

Not satisfied with just asking the questions, the three ultimately parted ways with their tribute act to focus their talents on an original music project.

The result is a band whose sound is still evolving, but one whose influences of metal, pop and prog are identifiable hallmarks of the music – their music. Offering a sonic mix of modern and nostalgia coupled with lyrics that are positively deviant, the band has shifted from asking questions of “what if” to answering them.

And with those answers comes the realization that the band that almost never was, is indeed the band it was always meant to be.

StoneRowe is excited to have just released “Higher,” their hard rock love song with lyrics inspired by Billy’s relationship with his wife as they chased their dreams from Memphis to Los Angeles and back again. The single serves as the first in a series of seven tracks the band considers as its modern day EP that will be released throughout the remainder of 2019.”

Put on your VR headsets and go retro gaming with us in the official lyric video for “Higher.”Listen now on Spotify – https://open.spotify.com/track/3a50lOkRz…