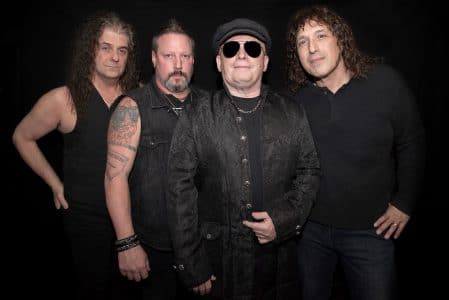 Sleaze Roxx stated the following in its review of Age of Fear including the new single:

“Fraser found some musicians who lived nearby in lead vocalist Patrick Gagliardi, drummer Brian Hamilton and bassist Mike Berardelli, and the results are stupendous. Storm Force have come up with a great mix of melodic rock meets classic rock peppered in with a bit of grit via Gagliardi‘s slightly Jorn like (but less gritty) vocals. I can’t say enough how good Storm Force‘s debut album is. Age of Fear opens up with the very melodic “Because of You” which the group provided a lyric video for. It’s a good song but there is a way better ones once you dig into the record a little further. The title track “Age of Fear” is a heavier number built on a solid guitar riff and highlighted by Gagliardi‘s strong vocals that sets the tone for the rest of the song.

The cream of the crop is likely next with the slower building and very melodic but not wimpy “Breathe” which starts off with Gagliardi handling the first verses before the chorus kicks in. The big surprise is during the second verse when guest female vocalist Serena Pryne starts singing with some heavier keyboards in the background. It really brings the song to a new level and is a real tour de force. Every time I listen to the track, I look forward to that moment when Pryne gets her turn and lifts the song to new heights. Fraser then delivers a great and tasty guitar solo before Gagliardi and Pryne join forces for the chorus.”