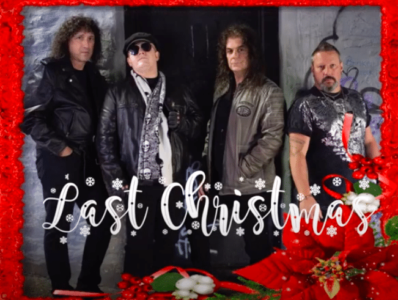 The following message was posted in part on Storm Force‘s Facebook page yesterday:

“We thought it might be fun to jam out a Christmas song to maybe help put a little positivity back in this world. Picking the song was the tough part. Our bass player Mike insisted it should be Wham‘s ‘Last Christmas’ because no one’s really ever rocked that one up before. We literally banged this song out (drums, guitars, bass & vocals) in less than 2 hours. Our attitude was, “if it sucks, we won’t release it!” We’re quite happy with the results. So here it is, we hope you enjoy it & we wish you all a Merry Christmas!

Any radio stations interested in playing this please contact us info@stormforce.ca and we will gladly send you a copy.”

Wikipedia provides the following summary about the single “Last Christmas” (with slight edits):

“”Last Christmas” is a song by English pop duo Wham!, released on Epic Records, and internationally on MCA Records in December 1984, on a double A-side with “Everything She Wants”. It was written and produced by George Michael, and has been covered by many artists since its original release.

The song reached No. 1 in Denmark, Slovenia, and Sweden and No. 2 in nine countries: Belgium, Germany, Netherlands, Hungary, Ireland, Italy, Norway, New Zealand and United Kingdom. Wham! donated all of their royalties to relief efforts for the Ethiopian famine. In a UK-wide poll in December 2012, it was voted eighth on the ITV television special The Nation’s Favourite Christmas Song. It was the most-played Christmas song of the 21st century in the UK until it was overtaken by “Fairytale of New York” in 2015.”