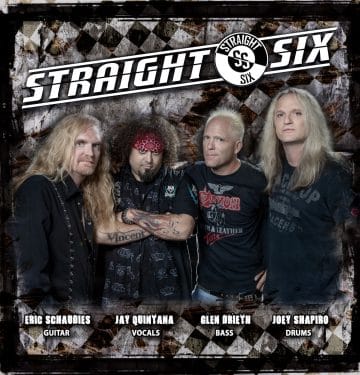 Sleaze Roxx stated the following in its review of the EP Straight Six:

“Right from the opening guitar riff of the first track “Black And Blue”, I was hooked. The make it or break it segment for the EP was answered very quickly as lead vocalist Jay Quintana‘s raspy vocals were the perfect compliment to the stellar music. One thing that I noticed very early on is that guitarist Eric Schaudies has a real Eddie Van Halen quality to his playing as he can play the simple yet infectious guitar riffs before letting rip one amazing piece of guitar wizardry from time to time along with a kick ass guitar solo on each track. The rhythm section of bassist Glen Drieth and drummer Joey Shapiro reminds me of bassist Michael Anthony and drummer Alex Van Halen when they were laid the groove and foundation for Eddie Van Halen to shine. Schaudies gets the same luxury with Drieth and Shapiro providing the solid and tight canvas for him to shine. Even Drieth gets his time to shine with some cool bass licks such as on “Middle Of The Ride.”

All the songs on Straight Six seem to have some great groove to them as you’d expect from classic era Extreme or Van Halen. In fact, “Old Back Road” reminds me so much of vintage Van Halen from the perfect harmonies, the great groove and Quintana‘s vocals. All of the songs on Straight Six are good to really good and I can’t wait to hear the band’s full-length Full Circle.”