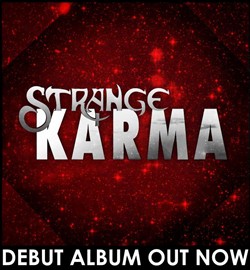 Strange Karma, the band the world has been waiting for, a powerhouse of rock!

Whoever said Arena Rock is dead? And on that note, who has the balls to compare a new band to classic luminaries like Zeppelin and Queen? Don’t take our word for it; afterall this is just a press release…so judge for yourself, give them a listen and then ask yourself the above questions. Or you can listen to their Myspace followers at www.myspace.com/strangekarma who account for nearly 100,000 friends and who have secured over 200,000 plays for the band.

Whilst the band have seen the ups-and-downs that the topsy-turvy music industry will put a new band through…Strange Karma have persevered as they get ready to release their first album on FnA Records (www.fnarecords.net).

It all started one day in a little bar in New York City when (lead vocalist) Martin Strange got up on a table and started singing along to Led Zeppelin’s Rock n Roll. From that moment on Martin realized what he needed to do. So, along with brother Paul, they started a band – Strange Karma. They played the local circuit (Sydney Australia), built up a repertoire of well-crafted songs, and eventually spread their wings.

A 3 month tour of the United States led to the band writing and recording what is the lead off track “America” (a declarative anthem and self-fulfilling prophecy) on their new album simply, but boldly, entitled Volume 1. Strange Karma’s American tour sparked interest all over the world. They played shows on Sunset Boulevard at The Roxy Theatre, The Cat Club and the infamous Whisky a Go-Go. In fact, one club had the band booked back no less than 5 times due to overwhelming demand.

So here it is…years and years of hard work and sweat equity…and finally a brilliant album to show the wears and tears from their dedication. An album that features 10 Zeppelin-esque toons of what some are calling “the most solid album to come out in years – melodic and edgy all at the same time.”

The album switches gears between a Zeppelin vibe to a Queen vibe with tinges of The Black Crowes and even the Doors in between. While its parts of all of the above, it is also freshly and uniquely modern as well. Strange Karma has carved out a unique niche that can be considered definitively their own.

From the opening roar & scream of the anthemic “America” to the closing strains of the epic “Indian Sun”, Volume 1 shows the full gamut of Strange Karma’s skills and versatility. The melodically haunting “Time” & instantly catchy “Young & Free” highlight Martin’s amazing piano skills. Martin switches to acoustic guitar for the sure fire radio hit “Down & Out” (a track which has already won Strange Karma Best Unsigned Act in the 2010 UK MMA MP3 awards) & also “Uneasy”, a ballad with the potential to hit number one on the country charts! Rockers “Fame”, “Harder than a Stone”, & “Storm” highlight the band’s powerful rhythm section and Paul’s emotive soloing. This is an album you’ll want to listen to again & again for years to come!