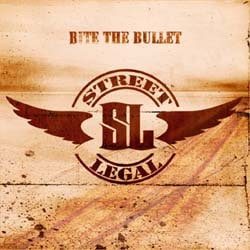 Frontiers Records is particularly pleased to announce the come-back release from Street Legal, “Bite the Bullet.”

Street Legal’s name came to prominence for the first time during the year 2000 when the band’s debut, “Thunderdome,” was released to strong critical acclaim in Europe on Frontiers Records. The band did already build a a solid reputation with some great live shows in their home country Norway, and their first show in May ’99 as support of WASP gathered such comments as: “Iron Maiden threatened KISS in 1980, Clawfinger showed muscle before Anthrax in 1990, Skunk Anansie blew away Therapy? in 1995. In 1999 Street Legal outplayed WASP.” – Stig Myhre (Nettpuls). “Street Legal should be the next Norwegian act to make a remarkable impact on an international level.” – Jan Dahle (Scream). After the release of “Thuderdome,” Street Legal performed some killer shows at the Sweden Rock Festival and at the Gods Festival in the UK.

Soundwise, these Norwegian rockers have been often compared to Thin Thizzy, Whitesnake and Blue Murder. “Classic rock with a strong blues foundation, still very harmony driven,” comments bass player and singer Bjorn Boge, when asked to describe the sound of the band to the uninitiated. “A lot of influences from the past: West Coast music, metal, hard rock from the late ’70s. Always with focus on the song. Lyrics are also important. Chuck Frazier, my buddy in the lyric department, is the major force behind this.”

After a long hiatus and some line-up changes, Street Legal are now back to rock with a superb new album that begins where the previous has left. Bjorn explains: “This record marks the introduction of my brother Oystein as the drummer in the band and also brings a more straightforward rock ‘n’ roll approach than ‘Thunderdome.’ For the time being we decided to stick with just the two of us. We know a lot of great guitar players, so the live lineup will be as strong as ever.” With Bjorn and his brother Oysten on drums, featured on the album there are Tore Ostby (ex-ARK, Conception) and Rolf Bjorseth playing guitars.

Bjorn concludes: “It’s been a long and bumpy ride the last nine years for Street Legal. Since ‘Thunderdome’ we went through heaven and hell: tour bus accident, personal disasters, depressions, divorces. The only problem we didn’t have was drugs! ‘Bite the Bullet’ was so hard to make, that we sometimes felt it was better to quit and call it a day. But we didn’t. And today I am very proud of what came out of this process. Street Legal will kick serious ass again. Looking forward to see you on the road!”

Final tracklisting of “Bite the Bullet” includes: “Loading Up,” “Somebody Up There Likes Me,” “Unconditional Love,” “Warriors of Gengis Khan,” “Shadow In My Heart,” “Bite the Bullet,” “Starship Trooper,” “Trapped,” “The Battle of Kringen,” “Maniac,” and “Silent Tear.”