New York City rockers Streetlight Circus have announced a string of shows for their Needle Down – Tour 2019 across North America starting on July 17, 2019. 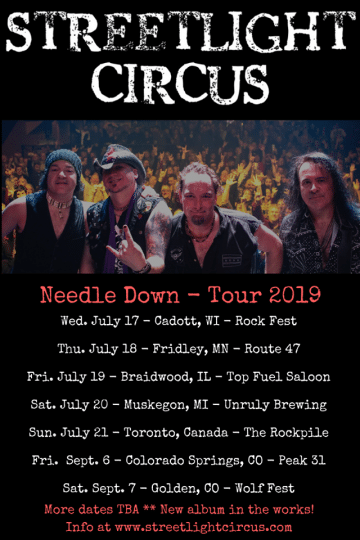 Sleaze Roxx caught Streetlight Circus performing live at Sleazy Slimey Sunday 3 in Hanover, Maryland, USA back in early May 2018 and stated as follows in its concert review:

“Streetlight Circus put on an entertaining set. I only recognized two songs — the title track and “Ghettoblaster” — despite having listened to their last studio album Needle Down quite a bit prior to writing my review of it. Then again, my review of Needle Down dates back to end of November 2016, which is probably the last time that I really listened to it so it’s not that surprising that most of the songs played live from that album didn’t ring a bell for me on this night. As it turns out, I wish that I had listened to Needle Down at least once on my way to Maryland as Streetlight Circus ended up playing six songs from the album with the other ones being one track from their self-titled album (which I didn’t know about before but ended up purchasing later that night) and two new songs — “Kisses Like Bullets” and “Grass Is Greener” — which sounded quite good on a first listen. I did end up speaking to David Shaw later on that night and unfortunately, a new album appears still far away. The group will be embarking on its first tour of the UK though from June 15 to 23, 2018 so for those in the UK reading this review, make sure you check the band out live.

While I enjoyed all the songs played by Streetlight Circus including the two new songs and “This Ain’t Hollywood”, I was really kind of just waiting for them to play “Ghettoblaster” which they did to close out their set. It was everything that I thought it would be! There were tons of people singing along to the song so clearly “Ghettoblaster” is and will continue to be Streetlight Circus‘ signature song.”