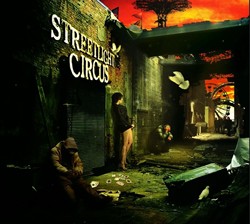 Established by singer, bassist and songwriter David Shaw in 2006 to support his acclaimed solo release ‘Walkin’ On A Wire’, the members soon became a unified rock and roll front prompting the changing of the group’s moniker to Streetlight Circus after Shaw wrote a song by the same name. Touting an array of all the right influences, the quartet consists of guitarist George Giannoulis and drummer Erik Fehrenbach, two long time friends and musical counterparts of Shaw as well as guitarist Fabio Bargna, the newest member to join the fun.

Together, these four veteran musicians have committed themselves to giving audiences the best possible show night after night and seeing as how the band’s audiences have grown, it is clear that they are doing it right. Streetlight Circus has shared bills with countless national acts in the New York area, have toured the country from all points south to the Sunset Strip in Los Angeles and has been invited to perform at festivals such as the enormous Rocklahoma, the popular M3 Rock Festival in Columbia, Maryland as well as New York’s JamFest. In addition, the band’s music has been featured on MTV original programming, radio stations from Texas all the way to Denmark, and compilation albums that have found their way to stores throughout the United States and Europe.