New York rockers Streetlight Circus consisting of David Shaw on lead vocals and bass, George Giannoulis on lead guitar, Alex Rude on guitar and Erik Fehrenbach on drums have dropped a video for the title track of their new upcoming studio album Super Fine Sugar via Escape Music, which will be released on September 23, 2022. 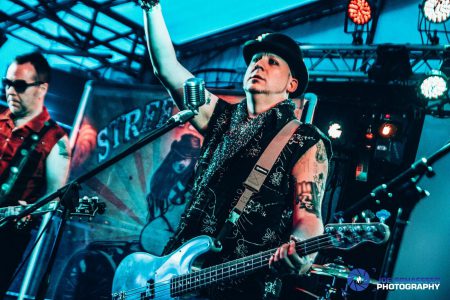 “The video’s debut serves as a run-up to the band’s new album which will be released globally by UK-label Escape Music this Friday, September 23.

Streetlight Circus will celebrate the release of Super Fine Sugar with a party and show at The Mercury Lounge in New York City on Friday, September 23rd from 6 pm – 8:30 pm. Opening the show will be The Blues Vultures featuring Ronnie Younkins of Kix.

Super Fine Sugar will be the third full-length release by Streetlight Circus and their first with Escape Music. The album features guest appearances by Tony Harnell (TNT), Brian Forsythe (Kix), Jesper and Jacob Binzer (D-A-D), Berton Averre (The Knack), and Jin Auer (The Posies). It was mixed and mastered by Grammy-winning producer Bob St. John who has been at the helm of albums by Extreme, Collective Soul, and Duran Duran.

The album will be available for streaming on all major platforms. In addition, CDs can be purchased at either www.Escape-Music.com or at www.StreetlightCircus.com. The band has designs on a vinyl release of Super Fine Sugar at a later date.”