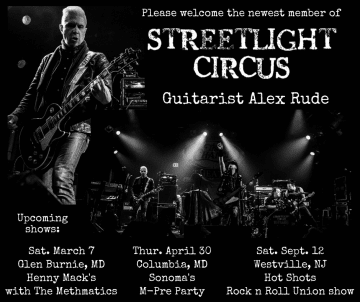 The band is working on its third full-length album due later in the year. The album will be a follow-up to its 2016 release, Needle Down, which was mixed and mastered by Bob St. John (Extreme, Duran Duran, Collective Soul).

Streetlight Circus has limited scheduled dates as it works on putting the finishing touches on the new album. Dates are as follows:

To support Needle Down, Streetlight Circus has toured the United States supporting bands such as Kix, L.A. Guns, Buckcherry, Junkyard, Faster Pussycat, Night Ranger, Y&T, Zebra, Winger, and others. The quartet also toured the United Kingdom with shows in England, Scotland, and Wales.”