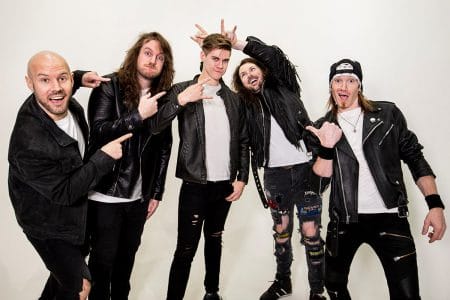 Canadian heavy metal rockers Striker have announced their newest member — drummer Jonathan Webster — who is replacing long-time drummer Adam Brown who announced his departure from the band back in early July 2019.

“Say hello to the NEWGUY! We are very happy to welcome Jonathan Webster into the Striker family as our new drummer! You may have seen him shred with The Order of Chaos, who have a new album coming out soon as well!

We will have some new tours to announce soon. The shred is coming!

To celebrate, use promo code NEWGUY on our online store for 30% off everything! www.striker-metal.com“

Striker‘s last studio album Play To Win finished at #8 on the Sleaze Roxx’s Top Ten Albums of 2018. Since then, the group has replaced its rhythm section with Webster replacing Adam Brown and Pete Klassen handling the bass duties instead of Will Wallace. Striker‘s line-up is rounded out by lead vocalist Dan Cleary and guitarist Tim Brown and Chris Segger.