Big news for Canadian heavy metal rockers Striker as their current tour will be their last with their long-time drummer Adam Brown. 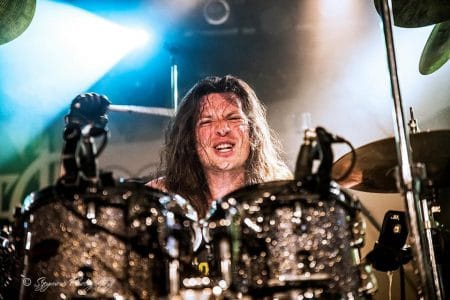 “We’re sad to say this will be our last tour with Adam. He’s been a beast behind the kit, but is off to tackle new challenges in life. We still have another 25 shows with the guy, so make sure to come out and see him shred one last time!

Here’s what he had to say:

“So – this is my last tour with Striker.

I’ve been so lucky to have had the opportunity to play music and travel the world with my closest friends (and family) for almost the last 10 years. Together we’ve built up something beyond any expectation.

I’ve met some great people, seen wonderful places, and have experienced the world. I know I leave the band in great hands, with Striker continuing its seemingly unending upwards path to metal glory. We’ve been putting on better shows to bigger crowds, and

I’m excited to see what new amazing opportunities are around the corner for the guys.

So huge thank you to everyone that’s made my journey in the band possible – especially my fellow band members past and present.

I look forward to the new challenges that await me, and to meeting my replacement on the Striker “throne”. “ — with Adam Brown.”

Striker‘s “On The Run” video:

Striker – On The Run (Official Video)