With Canadian heavy metal rockers Striker poised to release their fifth self-titled studio album on February 24, 2017, Don de Leaumont of The Great Southern Brainfart interviewed the band’s lead vocalist Dan Cleary and asked him whether he ever gets pissed off when people confuse Striker for Christian metal rockers Stryper. 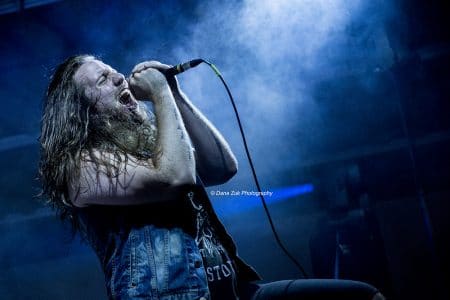 Clearly replied: “[Laughs] Dude, it happens so much but it’s kind of ok. At every single border crossing we come to we’ll say that we’re in Striker and they’ll be like, “Oh, I think I’ve heard of you guys from the 80’s.” We’re just like, “Yeah man” and they’re like, “Go ahead. I’ve heard of you guys.” [laughs]”

Cleary was also asked whether the band ran out of ideas when they called their fifth studio album Striker to which he responded: “[laughs] Well, I don’t know. To be perfectly honest, it’s more that we wanted to get artwork done in time. We had an idea for the artwork and we were just like, “This could be called anything” so we just decided to call it Striker. Lots of bands do that and we think it’s cool [laughs]. We don’t have a song called “Striker” yet. I always thought it was funny that the band Blue Murder had a video. It’s like they were saying, “We’re Blue Murder. This song’s called “Blue Murder” off of the album Blue Murder [laughs]. It’s just super funny. We should’ve done a “Striker” song but we fucked up.”

Cleary definitely is a powerhouse vocalist so he was asked when did he find his voice to which he replied: “[laughs] Thanks. Well, I was in choir for a bit when I was a kid but I don’t know if that counts. The only reason I started singing was because nobody else wanted to. I couldn’t sing and play guitar at the same time so I just said, “Fuck it. I’ll just sing.” At the time I was in another band playing guitar and that band disbanded and then Striker was the one. I feel like a lot of people get into it that way. They start out wanting to play guitar and for whatever reason they do something else. I was never really looking to be a singer. Sometimes is sucks [laughs]. It’s hard to be a singer, especially being on tour when you get sick. It’s so easy to fuck yourself up.”

You can read the rest of the interview with Cleary at The Great Southern Brainfart.