Striker to release new album ‘Stand In The Fire’

Canadian heavy metal rockers Striker are poised to release their new album Stand In The Fire on February 5, 2016.

“Edmonton, Alberta, Canada metallers Striker are ready to set out on a new adventure with their forthcoming album Stand In The Fire being released via their own Record Breaking Records label on February 5, 2016. Today, Striker shares an exclusive play through lesson for the song “Too Late”. Check it out and learn how to play this ripping track exclusively at GuitarWorld.com.

Guitarist Tim Brown comments about the lesson: “In this guitar lesson, I’ll teach you how to play our new song “Too Late” off of our upcoming album Stand In The Fire, out February 5, 2016. This song is full of classic 80’s metal tricks, like using the push (or syncopation) in your rhythm playing, using broken chords over a changing background riff, and last but not least, all of the epic shred and tapping to melt your fingers on. Though simple on first listen, there are lots of complex parts that can increase the difficulty and challenge that will make this song fun for all levels of guitarist to play.”

Stand In The Fire is Striker‘s most uncompromising record to date. A record packed with incredible riffs and colossal anthems, all laced together with epic harmonies. Inspired by legendary bands like Iron Maiden, Striker wear their hearts firmly on their battle jackets, soaking up the power and influence of classic rock and metal.

The band; Dan Clearly (vocals), Tim Brown (lead/rhythm guitars), William Wallace (bass) and Adam Brown (drums) recorded the album themselves with the help of Randy Black (who filled in on drums while Adam was away…) and mixing genius Frederik Nordstrom (Bring Me The Horizon, In Flames, Opeth) giving them not only the time and space needed but the freedom to set 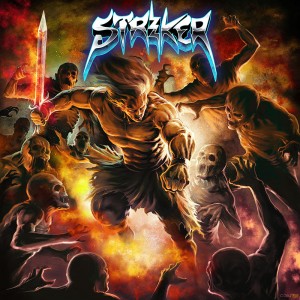 up the release direct to fans worldwide.”