Striker unleash “live in the studio” video of track “Too Late” 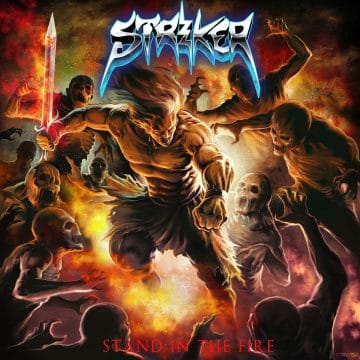 which appears on their album Stand In The Fire, which was released back in February 2016. Only Cleary and Brown were featured on that record.

Sleaze Roxx stated the following in its review of Stand In The Fire:

“I got to start by saying how much I like the guitar tone / sound on the album. It sounds quite retro ’80s and I love it. I also really like Dan Cleary‘s voice who has one hell of a set of pipes. What I am not crazy about is the plethora of instruments and excess guitar shredding that make the songs simply sound too busy. I have always liked songs that are simpler built on a stellar guitar riff and often Striker go over the top during their songs filling them with some crazy guitar shredding. In addition, it appears that Striker are sometimes guilty of cutting and pasting different parts of song ideas that they might have come up with together into one track making for a difficult transition from one part to the next, which hurts the flow of the song.”

Striker‘s “Too Late” (live in the studio) version: