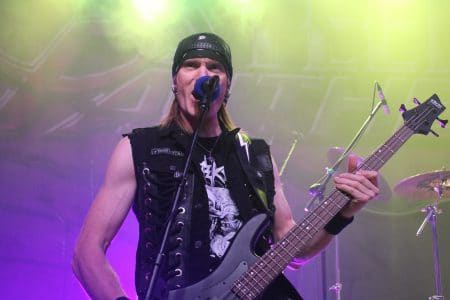 Canadian heavy metal rockers Striker consisting of lead vocalist Dan Cleary, guitarists Tim Brown and Chris Segger, bassist Pete Klassen and drummer Jonathan Webster have unveiled another “live in the studio” video, and this time for their track “On The Run” which is on their album Play To Win that was released back in 2018 and finished at #8 on the Sleaze Roxx’s Top Ten Albums of 2018. Klassen and Webster weren’t in the band when Play To Win was released.

Sleaze Roxx stated the following in its review of Play To Win:

“Striker are now at a very interesting point in their career. I imagine that they have a solid thrash metal base from their first few albums so can be paired up with a wide array of bands in a live setting. However, Striker now have a sound through their last two albums that could see them paired up on bills with more melodic hard rock bands. It seems that Striker have found the perfect balance between power metal and melodic rock on Play To Win. I can’t wait to see what they come up with on their next studio album but for now, I am simply going to enjoy one of the best albums of the year.”

Striker‘s “On The Run” (live in the studio) video: