Texas rockers Stripwired have released a second video in support of their upcoming album Another Shot, which will be released next month. 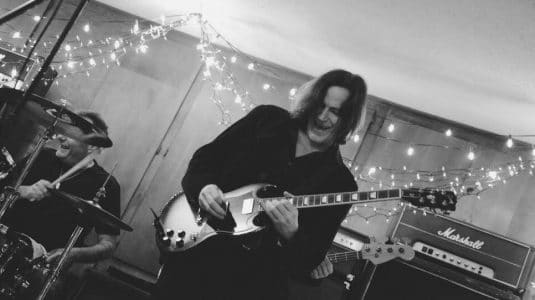 Sleaze Roxx recently interviewed Stripwired guitarist Michael Mroz and lead vocalist Darren Caperna, and asked the duo about the differences between the group’s self-titled debut album released back in 2007 and the upcoming new record.

Mroz replied: “The songs we released in 2007 was a collection of songs that we recorded in my home. The new record that will be released in January 2019 is a professional record! I spent 60 days on the guitar tones! Casey, our engineer really helped me achieve what I wanted. He found a 62 Gretsch that just sings. Listen to the beginning of “Another Shot.” I hope [deceased AC/DC rhythm guitarist] Malcolm [Young] would be proud!”

When it was pointed out that only Mroz and Caperna remain from the Stripwired line-up that released the debut album in 2007, Mroz advised: “Unfortunately, Jay [Benzi] and Taylor [Smith] decided to pursue professional careers. Mike [Wagner] had some personal issues that he had to deal with, so he ended up leaving as well. We actually just saw Mike last week and he is doing great! We had our eyes on Ken [Schiumo] for awhile. He was in a Bon Jovi tribute that played with us a lot. He has very heavy hands and feet. For the non-musicians out there, that means he plays hard. When he hits his snare at sound check and we are not expecting it, we all jump and curse him! The drummer is so important to a band. He is a big part of our sound. Sheldon [Conrad] also joined us from another tribute. He was in Def Leggend. He’s just an incredible bass player and singer. He knows how to be in a band. He’s a real team player and the nicest guy. He is also Canadian! Ramiro [Noriega] came to us as a suggestion from another previous member of Back In Black that stepped down after Mike Wagner. It’s a big committment to be in our band. We did 100 shows this year! Ramiro is an amazing guitar player and singer. Again, he’s real easy going, and knows that the songs come first. By far our best line-up. No drama. Everybody works really hard. I’m very proud of this band!”

You can pre-order Stripwired’s new album Another Shot on blue vinyl and/or on CD directly from the band’s website.