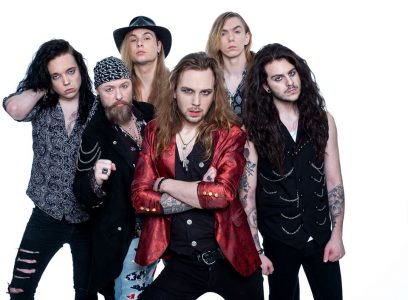 Strÿkenine‘s “Story” on their website indicates in part (with slight edits):

“Sweden has for many years been known for delivering promising musical acts worldwide, especially in the rock scene.

Do not be surprised if Strÿkenine becomes the next act from Sweden that takes the world stage on their shoulders.

Strong presence, catchy riffs, strong melodies and a large portion of “Rock ‘n roll” attitude proves that Strÿkenine has what it takes to conquer the world.

With appearances at several festivals and rock stages together with acts like Dynazty, Santa Cruz, Art Nation and Hardcore Superstar and a European tour in the spring of 2019, the band have built a strong unit filled with professionalism and visual stage performances, and today Strÿkenine becomes one of the strongest live acts from Sweden.

With two single releases during summer / autumn of 2017 (“Dangerous” and “Down n Dirty”) and a well received six track EP Nowhere To Run (2018), Strÿkenine has proven their talent and constant development when it comes to writing rock music for a wide audience.

Now the band is in a creative process to complete their debut album and with a new and fresh image and constant development in their stage performance, the band is now ready to show the world that 2020 is the year when Strÿkenine takes the big step on the world market.”