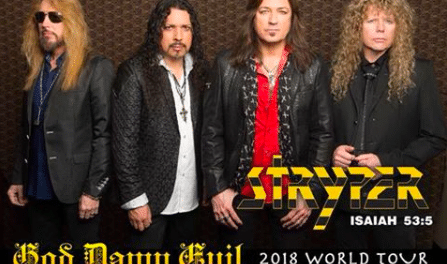 Stryper consisting of lead vocalist/guitarist Michael Sweet, drummer Robert Sweet, guitarist Oz Fox and new bassist Perry Richardson will be hitting the road in support of their new studio album God Damn Evil by the end of this month.

The Christian rockers released a schedule consisting of 39 tour stops mostly in the USA but also in Japan and Spain from April 28, 2018 to November 4, 2018. 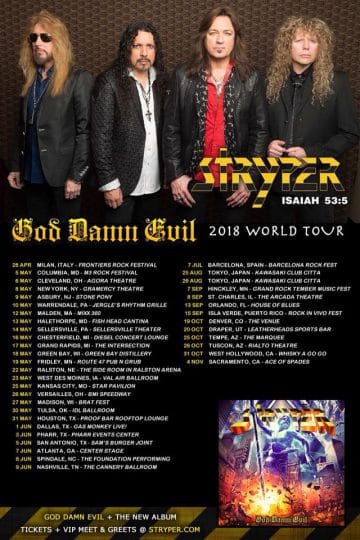 Sleaze Roxx stated the following in its review of God Damn Evil:

“Vocalist and guitarist, Michael Sweet, proves to us once again how strong and powerful his voice is on this album. One might say, he sounds better than ever. We all can name a few vocalist’s from the ’80s that should hang it up, but for Sweet, it doesn’t sound like that will be any time soon for him. Not only does he have a strong voice, but he has some great guitar licks and solos on this album. Guitarist, Oz Fox, continues to play some of the catchiest riffs and plays perfectly with Sweet on the melodies. Drummer, Robert Sweet, is laying down some of his best work to date. I will be honest and say that I have not paid that much attention to his drumming on the previous albums, but when I listen to God Damn Evil, his drumming really stands out to me. I know he is very talented and an excellent drummer, but his work on this album is truly amazing. Newly recruited bassist, Perry Richardson (previously in Firehouse), did not record the bass tracks for this album, but I am excited to see him perform live with the band and the revitalized energy he brings with him. I read somewhere that John O’Boyle played bass on this album. O’Boyle was also the bass player for Michael Sweet’s solo album One Sided War.

If “Take It To The Cross” turned you away from this album, all I can ask is that you give this album a chance. I will admit, I was a little taken back by that song and the chorus, but once I heard the rest of the album and found out how amazing it is, I am glad I didn’t let that one song shun me away from something this good.”

Sleaze Roxx also caught Stryper playing live in Toronto, Ontario, Canada back in June 2016 and stated the following in its concert review: “A couple of things struck me as I watched Stryper play on this night. First of all, Michael Sweet is simply one amazing singer. While he joked that he was much younger than he really was, the man is over 50 years old but his voice still sounds so powerful and he can seemingly hit all those high notes 30 years later! It’s truly a testament to his God given talent but likely also hard work to maintain and take care of his amazing voice. Second of all, the guitar harmonies displayed by Michael Sweet and Oz Fox were simply stupendous. Clearly, this guitar tandem is very underrated. Iron Maiden‘s Dave Murray/Adrian Smith and Judas Priest‘s K.K. Downing/Glenn Tipton may get a lot of credit for being some of the best guitarist duos of all-time but it’s about time that Fox and Michael Sweet were considered alongside these greats. Third of all, Stryper always seem to sound so tight live and their latest performance at The Rockpile was no exception. The group simply killed it on this night!”