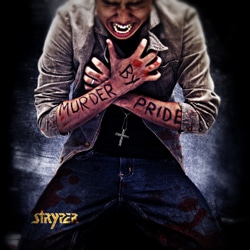 STRYPER has announced the following European tour dates in support of the release of their new album “Murder by Pride”. “Murder by Pride” was released in North America on July 21st and in Europe on August 28th . The European release of Murder By Pride features a bonus track of My Love, My Life, My Flame taken from the Michael Sweet solo album Touched; a song dedicated to Sweet’s late wife, Kyle, which he wrote for her during her battle with cancer.