Stryper announce US dates for ‘Calling On You Tour 2022’ 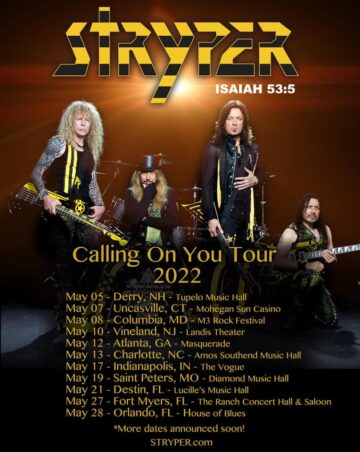 Christian rockers Stryper consisting of frontman Michael Sweet, drummer Robert Sweet, lead guitarist Oz Fox and bassist Perry Richardson have announced dates throughout from the United States of America for their Calling On You Tour 2022.

“We are so excited about touring again. We’ll be touring heavily in 2022 and hope to see you all. What Venue should we hit in your city? Here’s our first round of tour dates. More coming soon but if you live near one of these cities, grab tickets now. Love you all and can’t wait to see you in person next year.

Sleaze Roxx stated the following in its review of Stryper‘s concert at The Rockpile in Toronto, Ontario, Canada back in mid-2019: “Overall, I really enjoyed Stryper‘s concert (as usual) although I think that I would have enjoyed even more closer to the stage. I always enjoy going to Stryper concerts as it seems to be a different and more balanced crowd with people from all walks of life (such as more couples) compared to a typical heavy metal concert. One thing I know for sure, when Stryper come back to play in Toronto, I will be there once again!”