Many artists and bands declare that they play music for themselves and if other people like their music, that’s a bonus. 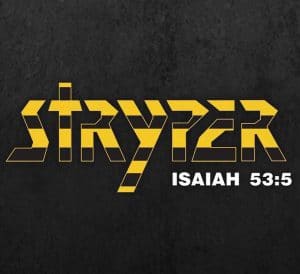 In the case of Christian metal rockers, Stryper, it appears to be the opposite.

“I’ll begin writing the new Stryper album after Thanksgiving, upon my return from Australia. We start recording in January! As I always do, I’ll ask you this -What do you want to hear on the next Stryper album in terms of songs? All metal, more ballads, more “pop” metal, mid tempo grooves, long/multi tempo arrangements? Should we lose the Y&B once and for all? Sound off and let us know? We want to make this one count. If you hate us, this one will make you love us. If you love us, you’ll love us even more?

Stryper have moved away from their trademark yellow and black colours in the past. Wikipedia states the following (with slight edits): “On August 21, 1990, Stryper released the controversial album Against The Law, which drastically changed the band’s image and lyrical message. While their earlier albums all had yellow and black colours in the covers and the lyrics spoke of God and salvation, Against The Law featured the band with black leather clothes and with no mention of the word “God” in the lyrics at all. The band’s musical sound was also heavier, closer to classic metal. Drummer Robert Sweet said that the change of image and sound was in response to the criticism of the previous album and an attempt to leave behind their glam metal image.”

Sleaze Roxx stated the following in its review of Stryper‘s last studio album God Damn Evil: “I have to give major props to Stryper for the music they have been releasing in the last ten years. There are not many bands from the ’80s era that are releasing music like this, or even new music period! Stryper have not slowed down one bit. in fact, I would say they have gotten heavier and faster. Case in point is the lead off track “Take It To The Cross.” This song is a trailblazer, thrashy, and a unique song for Stryper. They have not released a song like this, and major kudos for them to make a song like this. This was the first song to be released to the public, and it got mixed reviews, to say the least. People either loved it or hated it. I find myself enjoying it more and more every time I hear it. It actually reminds me of another ’80s Christian rock band, Bride, and something they might have put out on one of their albums.”

Stryper‘s “Take It To The Cross” lyric video:

Stryper – “Take It To The Cross” [Official Visualizer Video]

Subscribe To Be Alerted When We Add New Videos – http://radi.al/SubscribeFrontiers | “Take It To The Cross” feat. Matt Bachand (Shadows Fall, Act Of Defiance…