It’s no secret that Stryper guitarist Oz Fox has had some major health struggles in the last few months. After collapsing on stage while performing with Sin City Sinners at Harrah’s Las Vegas in Las Vegas, Nevada, USA on August 11, 2018, Fox was rushed to hospital where he was diagnosed with having had a seizure. The rest of his Stryper bandmates had to take the difficult decision to tour as a trio and then with temporary fill-in Howie Simon until Fox was ready to get back in the line-up in October 2018.

The Stryper band members got a surprise visit from Christian activist Todd White as Fox‘s wife Annie Lobert attested with the following Facebook post about 12 hours ago: 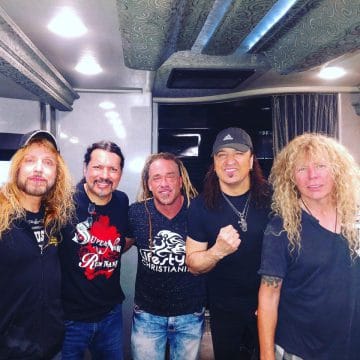 “Todd White came on the Stryper tour bus & prayed for Oz Fox & the guys! Totally rad! Thank you Todd for being who you are—humbled by your heart to give!”

Lifestyle Christianity describes White as follows: “Todd was a drug addict and atheist for 22 years—when in 2004—he was radically set free! Todd believes that redemption and righteousness are the foundational keys for living life as a new creation in Christ. Todd’s foremost desire is to see the Holy Spirit flowing through believers everywhere that they go–at work, school, grocery stores, malls, gas stations, and more. Todd’s true joy is being able to reproduce a 24/7 kingdom lifestyle in every believer. His heart is to activate people in the simplicity of who they really are and confront the barriers that hold them back from being who God created them to be. No one is excluded!”

I talked to my husband and asked him a few questions about the Stryper tour so far:

Annie: How has the tour been so far?

Oz: “Everything has been going well. The medication that I’m on makes me a bit tired and I have to take more naps throughout the day but all in all everything is going well and I expect to finish out the tour with no problems. Everyone has been very supportive and I am looking forward to seeing more friends and family as we finish up our tour.”

Annie: How has this whole situation increased or decreased your faith?

Oz: “Well, nothing ever decreases my faith! God never lets me down. If anything my faith is stronger than ever! So many blessings have come my way and I am always very thankful for them. No doubt in my mind that God has his eyes on me.”

Todd White—a well known man that the Holy Spirit totally uses for miracle healings & words of knowledge…was at the VERY same hotel as Stryper last night. Todd found out about it…contacted the front desk & said he wanted to pray for Oz’s tumors.

So…he jumped on the Stryper bus…and the Holy Spirit completely SHOWED OFF! Todd got specific words for all the guys. Todd asked them questions about things in their lives he had NO info from PRIOR. Things that were private, even the public did not know. Medical problems & struggles…and Todd graciously laid hands on them & prayed!

I wish I could been there…so maybe next time! All I know is that this FOR SURE was a divine appointment set up. YAY God!!!

What were the chances that they were both in the same city, same hotel, same night, both touring? Yep. Jesus you’re so cool!

We just want to thank Todd White & his team for being who they are and for what they do. True servants & blessings to Stryper & so many others.

Please continue to pray for Oz! We have no info on the status of the tumors…but we are going to schedule another MRI to see if the tumors have gotten smaller, or if they have healed.

We love you guys so much! Thank you for the continued prayers, support, love & blessings you’ve all given.

With God, ALL things have been possible.

Love~Annie (Oz’s squeeze aka gal aka babydoll aka wife)”