Christian rockers Stryper consisting of frontman Michael Sweet, drummer Robert Sweet, guitarist Oz Fox and bassist Perry Richardson have launched a Kickstarter campaign to raise funds for the creation of the first official Stryper documentary. As of press time for this article, Stryper had already raised $47,012.13 US out of their initial goal of $100,000.00 US.

“Since DAY ONE, we’ve always been able to count on you (the fans) to support Stryper. Thank you!

Now 35 years after you rallied hard to blast us into MTV HISTORY, we’re calling on you once again with a NEW MISSION...help do the same thing for us in the digital age of streaming.

We want to make an OFFICIAL STRYPER DOCUMENTARY FILM that not only tells OUR story, but most importantly the stories of the greatest FANS on the planet, YOU!

We’ll combine it all to help other people come to know the Lord.  We want to be able to tell these stories, YOUR STORIES, with Stryper’s unique voice; as well as share our faith, our music, and our FUTURE with the world.

These days, everything is about streaming services. Music, movies, videos, audiobooks; if you name it, you can probably stream it.

That’s why we wanted to team up with our fans to create something that could appear where Stryper NEVER HAS…the homepages of places like Netflix, Hulu, & Amazon Prime Video.

Why these seemingly non-music places? Well, by supporting this documentary and creating something worthy of living on those streaming services; we could legitimately reach millions of people who may have otherwise NEVER KNOWN about Jesus.

Remember playing Stryper cassettes back in the day for your “non-church” friends who were listening to Ratt, Mötley Crüe, & Poison? By supporting the creation of this documentary, we’ll be able to bring this practice into the DIGITAL STREAMING AGE because you’ll have the ability to easily share this film/video with any non-believer friends.

However; just like it wasn’t easy to get Stryper onto MTV, it’s going to be TWICE as difficult to get today’s equivalent (Netflix, Hulu, or Amazon Prime Video) to pay attention and support our mission. 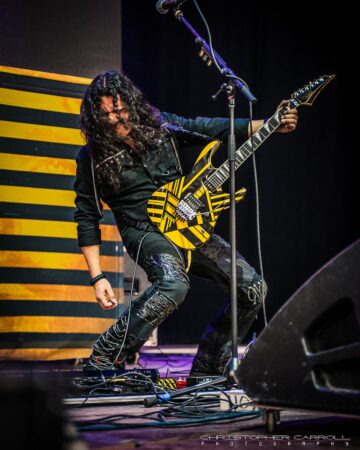 As soldiers under God‘s command, that means we’re once again going to have to BEAT THE ODDS and bring the message of Jesus to a place it has never been brought. It also means that to do this properly, we’ve got to raise the money for production OURSELVES.

We’ve decided to do that using Kickstarter.

We had plenty of film companies approach us about wanting to tell the amazing story of Stryper fans and what God has done through this band; but in the end, they all had the same thing in common – they wanted to CHANGE or EDIT the story in some way or another to make it appeal to a broader mass audience and we just couldn’t agree to that.

This story needs to be told truthfully and without “corporate minded” editing. THIS IS YOUR STORY, namely one about the most amazing fans in the world and what God has accomplished. It simply cannot be edited outside of our hands.

The only way to properly tell the story the way it deserves to be told is through YOUR DIRECT SUPPORT, so that’s why we’ve launched a Kickstarter for this film.

Kickstarter has been the world’s leading platform for crowdfunding for MORE than a decade. We really needed to work with a website that was extremely safe & secure, especially when it comes to the kind of funding needed to create a feature length film, so Kickstarter was the perfect choice

Thanks to the nature of Kickstarter, support our initiative and you’ll be rewarded with some EXCLUSIVE incentives that will ONLY be available as part of this project.

The MORE SUPPORT we can get for the film; the BIGGER, BETTER, LONGER & MORE INVOLVED the production can become.

We can go MORE IN-DEPTH, include MORE ORIGINAL MUSIC, and create the definitive, authorized film dedicated to the stories of Stryper and the best fans in the world, YOU!

Now, Kickstarter is an ALL OR NOTHING proposition. Meaning, if we don’t reach the initial goal of $100,000 – the Kickstarter project DOESN’T fund, we get NOTHING, there are NO REWARDS, and this documentary DOES NOT GO INTO PRODUCTION!”