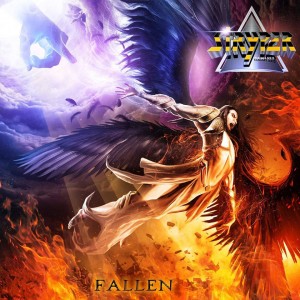 Christian heavy metal rockers Stryper have released a video today for the song “Pride” which coincides with the release of their new album Fallen.

The Christian rockers first released a covers album entitled The Covering in 2011 which consisted of twelve cover songs ranging from Van Halen‘s “On Fire” to Ozzy Osbourne‘s “Over The Mountain” to Iron Maiden‘s “The Trooper.” The album also featured one new original track simply entitled “God.” Back in February 2011, Stryper frontman Michael Sweet spoke to Sleaze Roxx and commented on how the group picked the songs for The Covering. Sweet stated: “It was simple because it was songs that we grew up on. There was no difficulty at all and the album came together fairly quickly. I presented a list of songs, a couple of additional suggestions were thrown in there by the rest of the guys in the band, and that was it — it was that simple. I felt that it was very important that we include a new song to solidify our faith and our beliefs — to show that we are still very serious about that. That’s how the song “God” wound up on there and, musically speaking, we also wanted to show people that we could still rock hard.”

Stryper then released a greatest hits compilation entitled Second Coming in 2012 which featured two new original tracks “Bleeding From The Inside” and “Blackened.” The purpose of that greatest hits compilation was really for Stryper to gain ownership of the masters to these recordings so that they could control and license out the songs as they wished, or to whom. Sleaze Roxx stated in its review of Second Coming: “The new recordings on Second Coming have a consistent, rawer, and livelier sound than their slick and overly produced predecessors. Case in point, “To Hell With The Devil”, “Soldiers Under Command”, “Sing A Long Song”, and “The Way” have more bite than the versions previously available.”

In early November 2013, Stryper released a new album entitled No More Hell To Pay, which received critical acclaim throughout the world including from Sleaze Roxx who stated in its review of the album: “I was a tad skeptical that Stryper could deliver the great CD that they were advertising — even after getting a preview of the powerful and heavy riff based “Marching Into Battle” at the Christian pioneer group’s Toronto show back in July — but that is exactly what the band has done. Heavy riff based songs… you got ’em! Awesome vocal melodies… you got ’em! Scorching guitar solos… you got ’em! Michael Sweet‘s signature vocals… you got ’em! Proudly praising God’s word and message… you got it! A great sounding CD… you got it! Vintage Stryper sound… the band is back better than ever!”

Stryper‘s No More Hell To Pay went on to reach the number one spot for Sleaze Roxx’s Readers Top 20 Albums of 2013 and the number nine spot on Sleaze Roxx’s own Top Ten Albums of 2013. Sleaze Roxx concluded, “…good music is good music, and No More Hell To Pay is a great disc regardless of your beliefs. Michael Sweet sings with such conviction on this album that you’d swear his end is near and he is bellowing for all he is worth one last time. Of course that’s not true, as not only has Stryper been one of the busiest bands around the last couple years but this album proves they will be delivering some class, and a positive message, to hard rock fans for many years to come.”

Sleaze Roxx interviewed Stryper‘s frontman Michael Sweet once again in December 2013 who provided his thoughts on No More Hell To Pay receiving critical acclaim by the press and fans alike: “We wanted to get back to our roots. The mistake that bands from the ’70s and the ’80s have made — in fact, we’ve made them — is we tried to reinvent ourselves so we lost sight of what made us popular to begin with. On this record we went back to our roots in every sense of the word. We gave people — fans or critics — a record that took us back to who we are. There’s guitar solos in every song, there’s screams in every song, energetic songs and big vocal harmonies. Everything that people have grown to love about Stryper — they get that and then some on this record.”

Once again, Sleaze Roxx caught Stryper‘s show at the Rockpile Bar & Nightclub (renamed Rockpile West due to a sister club opening in the east end of the city) on June 5, 2014. Sleaze Roxx commented in its concert review: “A Stryper concert always feels different than any other hard rock and heavy metal show that I attend simply because the audience is not comprised of the usual metal crowd but rather a more diverse fanbase including some Christians who may like hard rock music but only really attend Stryper concerts. One difference is the atmosphere. For instance, out of all the concerts that I have attended in the last year, the two friendliest crowds — where strangers became friends — happened to be the ones at Stryper‘s two Rockpile West shows.” Just like before, Stryper did not disappoint as Sleaze Roxx concluded: “Once again, Stryper put on one amazing live performance and I can’t wait to see them play live again.”

To commemorate their stellar live shows, Stryper released Live At The Whisky on September 19, 2014. Sleaze Roxx concluded in its review of the live album: “For any Stryper fans, picking up Live At The Whisky should be a no brainer. Not only do you get a CD of the band playing live and sounding better than ever, you also get a DVD of that same live performance. For anyone not that familiar with the band, Live At The Whisky is an excellent introduction to the world’s best Christian metal band, period. They are also one of the most professional and best sounding metal bands that are still around, rocking and rolling 25 to 30 years after their ’80s prime.”