Christian rockers Stryper are leading by example by turning the other cheek and choosing not to engage in trading verbal salvos with Faster Pussycat after some of the sleaze veteran group’s members dished out with what has to be deemed unprovoked insults towards Stryper.

“During the live recording of Another FN Podcast With Izzy Presley on the Monsters Of Rock Cruise “Shredders From The Deep”, Faster Pussycat members Danny Nordahl and Chad Stewart talked about their distain for the band Stryper.

While picking on their friend Eddie Trunk along with his That Metal Show cohost and comedian Don Jamieson, they unleashed on Stryper.

“Stryper hates us. We don’t see eye to eye with Stryper” Stewart continued.

“Fuck Stryper. Stryper’s the worst piece of shit ever. They love Jesus and dress like bumble bees. Am I the only one who see this as fucking horribly horrible? I really fucking hate Stryper, there is no way around it” Danny Nordahl said.

Stewart continued to tell the story about how Stryper was playing an acoustic set in Chicago with, as he put it, “that horrible singer from TNT (Tony Harnell)”. He recalled that John Corabi and himself decided to go play bass and drums with them after downing a bottle of Patron.

Stryper was doing Boston songs with Harnell because he and Michael Sweet had both fronted the band. Needless to say, the impromptu jam session did not go as planned. 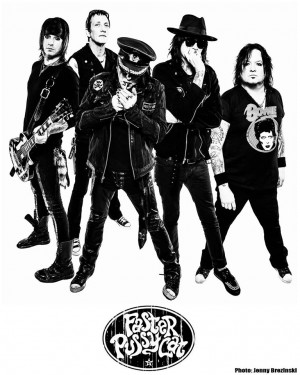 “They did not find that amusing, strangely, I don’t understand why”, Stewart said.

Don Jamieson coined it “To Hell With My Liver”.

During the 1st half of the show that featured Danny Nordahl being Danny, he did talk about the new Pussycat EP that is slated to come out.

“We got so many punk rock cover songs. I hate Faster Pussycat (joking of course) but this is gonna be the best record they ever made. Really, it’s good. It’s legit.”

When I asked him when it would be out, he simply said, “How the fuck would I know, I don’t even know what month it is”.

When asked about their partying reputation, Stewart said that Night Ranger has them beat.

“Night Ranger is the most evil band ever” Stewart said. “Ranger Danger, that’s for real. You think we fucking party? Hang out with Night Ranger. We’re nothing compared to Night Ranger. They’ve been partying for 60 fucking years. We got nothing on them.”

Of note, Stewart and Nordahl only joined Faster Pussycat in 2001 after the group’s late ’80s / early ’90s heyday and they have only played on one Faster Pussycat studio album (The Power And The Glory Hole in 2006).

Stryper‘s long-time frontman and leader Michael Sweet responded earlier today to the barrage of insults from Stewart and Nordahl with the following message on his and Stryper’s Facebook pages:

“My first reaction to this was to just let it die and not give FP what they most likely want (free publicity) but now that people are posting it and wondering why I guess it’s time to respond.

First, I’m not really that familiar with FP. Motley Crue, LA Guns, Pretty Boy Floyd and Guns & Roses of course – all bands that have made their mark and don’t really need to prove anything by blatantly attacking other bands just for a shallow blurb on Metal Sludge or Blabbermouth.

I first met Taime (who in all fairness didn’t make these comments and is one of the only original members left in FP) when I did That Metal Show with Janie Lane. Some comments were made by Taime on TMS that left me thinking that there might be some animosities from the FP camp. Not sure why, we’ve never publicly said anything negative about FP, nor will we. Truth is, we just don’t know them well enough and even if we did, it wouldn’t be our style. We do our best to rise above the negativity and unfavorable comments on a daily basis – we’ve gotten kind of use to it.

So life will go on, we’ll continue to tour, record albums and make videos with the original lineup and a huge fan base all over the world no matter what the fill in drummer and bass player of FP thinks.