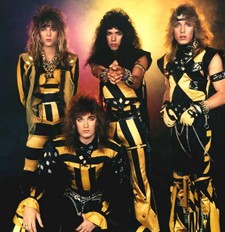 SongVest, the company that reinvented the music memorabilia business by offering the ultimate fan collectable — the songs themselves — has announced their next major online auction will take place March 26 to April 2 at www.songvest.com and will include “Together As One”, a classic ballad that has sold over 1 Million copies from Christian hard rock icons Stryper.

After recently partnering to sell 50% of “GOD”, Stryper singer and songwriter Michael Sweet has again joined with SongVest to offer fans, collectors, and investors two unique packages to bid on:

“Because the Mastering Session for “GOD” was such a unique experience for the fans that participated, we decided to continue that type of experience by offering fans the opportunity to come have dinner with Lisa and Michael in Boston,” said SongVest President Sean Peace. Fans have some flexibility around the dinner and could even make it more special by renewing their vows or something similar.

The auction will end at 3PM EST on Saturday, April 2. Fans can register now at www.songvest.com and go behind the scenes with Michael to learn how and why the song was written.

Since 2007, SongVest has offered music fans, collectors, and investors the unique opportunity to share the royalties with the writers of their favorite music. Past auctions have included the rights to songs recorded by Aerosmith, Bon Jovi, Carrie Underwood, Ringo Starr, Ozzy Osbourne, and The Monkees.