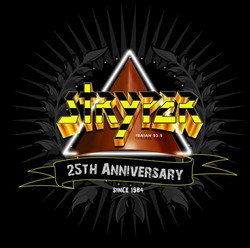 The first single-release from the upcoming Stryper album “The Covering” is now available on iTunes at this location!

Following the success of their 25th Anniversary World Tour earlier this year, legendary rock band Stryper headed into the studio to work on their upcoming album, The Covering, tentatively scheduled for release October 13th from Big3 Records/SONY.

The Covering, produced by Michael Sweet, will be unlike any previous Stryper recording, in that it’s a collection of cover songs from bands that inspired them and helped to shape their sound and musical identity, including past hits from Judas Priest, Iron Maiden, Led Zeppelin, Kansas and many others. A cover of Black Sabbath’s hit “Heaven and Hell” will be the first single, with an expected iTunes release in advance of the album. The Covering will also include “God,” a new original recording from Stryper.