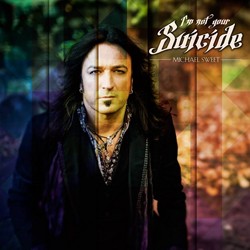 “Been writing and arranging George Lynch and Michael Sweet songs for the new Lynch/Sweet/Tichy/Lomenzo album,” said Sweet. “Coming along well. I guess I work better under pressure (less than two weeks to get 12 songs put together). The pressure makes me focus.”

Frontiers Records will release the yet unnamed new band project featuring Sweet, Lynch, former White Lion bass player James Lomenzo and ex-Whitesnake and Foreigner drummer Brian Tichy. Sweet will be overseeing production duties, with a release date slated for after the summer of 2014.

Sweet will also release a new full-length solo album, ‘I’m Not Your Suicide’, and his first autobiography, ‘Honestly: My Life And Stryper Revealed’, on May 6, 2014 via BIG3 Records.

Sweet continues to record and tour with Stryper, as well as touring and recording as a solo artist, all the while making frequent trips to Nashville where he is writing with some of the biggest music writers in the business.

“After 30 years in this business, I feel honored and blessed to be able to continue doing what it is I love, making music,” said Sweet. “I’m extremely thankful to have the greatest fans in the world. God has blessed me with this talent and I plan to continue on this path as long as I can draw breath.”