The Suicide Bombers continue their look back on their video history this time with the third video that they ever did for the single “Bladerunner (Tokyo Nights)” from their second studio album The Sex Tapes (2015). 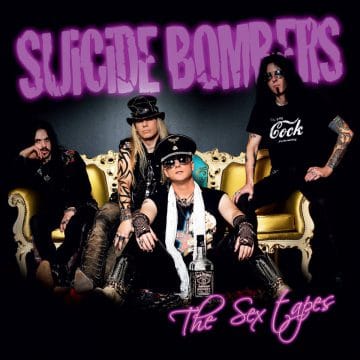 “With our first album we hadn’t thought about a video-single at all. That was to be the last time a video wasn’t picked before recording started. When “Bladerunner (Tokyo Nights)” was brought in, we all knew we had the lead off track for what was to become the second album… although “Devolicious Boys” ended up being the first video.

For different reasons, The Sex Tapes took a long time, so the idea of releasing “Bladerunner” as a video and download single only was kicked around, until we finally got it all together and did the mini album.

As always we wanted to push the envelope and make the video more exciting than the first one. We shot the band performance parts in a cave, belonging to the military, at Alnabru in Oslo, Norway. 2 smoke machine running non-stop, lights and band and camera man working their asses off for way too many hours, but it did turn out great.

The escalator scenes were shot at Nydalen subway station, before they remodelled, during normal opening hours… We didn’t have a permit for the shoot and scared quite a few commuters for a few hours, but loved the lighting and really wanted it in the video. Those turned out to be some of the coolest scenes.

“Bladerunner (Tokyo Nights)” has been performed at every concert since it was written and is still one of our most popular songs. We love seeing more and more people throwing their fists in the air and singing along to the OH-OH parts of the chorus.

As mentioned in Part 1, we also shot a few takes for the “Devolicious Boys” video at this set.