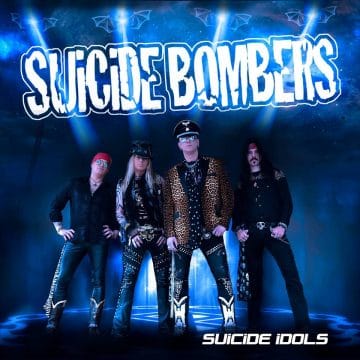 Norwegian sleaze rockers Suicide Bombers have released a video for the almost title track dubbed “Suicide Idol” from their new upcoming album Suicide Idols, which will be released on April 21, 2017.

Sleaze Roxx stated the following in its review of the Suicide Bombers‘ prior album The Sex Tapes: “Hailing from Oslo, Norway and dripping with swagger, sex appeal and more talent than a body has a right to have, the sleaze merchants in the Suicide Bombers deliver and deliver in spades with The Sex Tapes. The Sex Tapes is as tight and as perfect an EP as any other I have heard. Not only do the six tracks drag you through the mire and leave you begging for more (so much more), but the mastermind behind the Bombers, Chris Damien Doll, ups the bloody ante and says “Fuck it! Let’s not only blow away the masses with a killer EP, but let’s toss in between each track poignant dialogue that makes this lil’ EP bloody epic!”. A be damned concept EP! I know — right freakin’ on!”