The Suicide Bombers are looking back at all of the videos that they have released over the course of their history. So far, the Norwegian rockers have reminisced about their videos for their singles “Devolicious Boys” and “Bladerunner (Tokyo Nights)”, and now they are providing their views on the video for their single “Ready For Tonight” from their album Suicide Idols, which was released back in 2017.

The following message was posted in part on the Suicide Bombers‘ Facebook page earlier today (with slight edits): 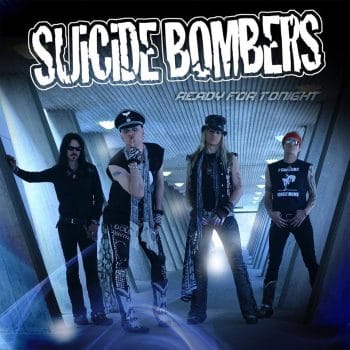 We were working on the SUiCiDE iDOLS album and starting to get a little antsy from the studio. Beat Commando Lyle Starr had joined the band and we wanted to roadtest the new line up… get out there and play. Since it had been a while since the last record, we decided to finish “Ready For Tonight” first and release a video to coincide with the tour.

The outside band scenes were filmed at Sinsen subway station in Oslo, where we also did an extensive photoshoot and got a lot of the photos for the SUiCiDE iDOLS cover. Again it was during opening hours, but we had more experience by now and knew how to get what we needed without keeping at it all day.

The band performance scenes where shot in an underground side-tunnel to one of the subway stations in Oslo, and for this we had a permit. Unfortunately nor we, or the ones handing out the permit, were aware that the Queen of Norway has a storage facility just a steel door away from where we were filming. Under normal circumstances, no one would have noticed, but the red smoke bomb you see going off during the guitar solo filled the whole tunnel with thick smoke and a heavy smell of sulfur, which set off the fire alarms wired directly to the castle.

Needless to say it didn’t take long til security showed up and rendered our permit useless. We managed to talk our way into finishing the shoot anyway, and were allowed to… if we promised not to use more smoke… So, we set Lyle‘s cymbals on fire instead and continued filming.

“Ready For Tonight” is a permanent fixture in our set since the tour of the same name, and the keen listener will notice several differences between the video version of the song and the album version.