Great news for fans of Norwegian sleaze rockers Suicide Bombers as the group will be releasing a new single titled “So Bad” on October 11, 2019 and a new studio album titled Murder Couture on October 25, 2019. 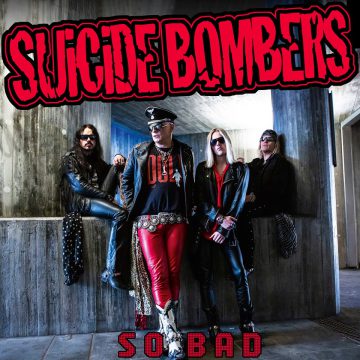 “Ladies & Gentlemen! It’s been a long wait, but we are motherfucking back!!!

Our brand new 10-track all-killer-no-filler record, MURDER COUTURE, is currently being pressed and ready for release on OCTOBER 25th. It will be available simultaneously on CD, ONLiNE & 180g black ViNYL.

The releaseparty, with all new set list, is taking place at ROCK iN in OSLO on NOV 2nd, with concerts booked throughout November and new year.

To shorten the wait, we’ll release a brand new ViDEO and ONLiNE SiNGLE for the track “SO BAD” on OCT. 11th.

Sleaze Roxx stated the following in its review of the Suicide Bombers‘ last studio album Suicide Idols released back in 2017: “If every song was as strong as “Suicide Idol”, this would be a contender for album of the year. Truth is, I really enjoy every song on Suicide Idols except for “Sex Star Icon” which simply does not have the melodies and hooks that all the other tracks on the album seem to have. One impressive thing about Chris Damien Doll is that even though he is far from being the best vocalist, the songs are written in a way that his raspy voice really shines throughout. Throw in some timely background vocals and sing along type choruses for many of the songs and you have some very enjoyable vocals to listen to. Even though Doll also known as The Sleaze Fuhrer has a rough and tumble delivery, unlike for instance fellow raspy vocalist Blackie Lawless (as of the last 15 years), you can actually understand quite clearly exactly what Doll is saying.”