Norwegian rockers Suicide Bombers will be releasing their new song “Ready For Tonight” on August 29, 2016.

Suicide Bombers also announced yesterday that they have a new drummer by the name of Lyle Starr (see video below).

“THE MOST EXPLOSIVE ROCK’N’ROLL BAND IN HISTORY!

…from the future, 4 intergalactic superstars were sent back through time, on a mission from the lightning gods, to single handedly ressurect the bleeding corpse of rock’n’roll. Collectively they are known as the SUiCiDE BOMBERS. 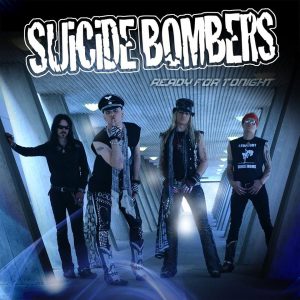 Chris Damien Doll (Lead Vocals and Rhythm Guitar) – The Sleaze Fuhrer;
A megalomaniac visionary and bulletproof S-S-Star. So resilient to outside interference that he’s been proven impossible to successfully clone. A criminal mastermind presented with the choice between leading this mission or 666 million years in a maximum security twilight zone.

Lazy Leather (Lead Guitar and Backing Vocals) – The Sex-Gunslinger;
A supersonic wave controller, so intense and mesmerizing that female species, all across the universe, fight to get closest to the stage when his magic fingers grace the fretboard. The high frequency designer of the technicolored revolution, with an eye for all the dirty details in any sordid affair.

C. Slim (Bass and Backing Vocals) – The Thunder Mechanic;
A rocket powered grease-godzilla! Half man, half machine …and all rock’n’roll! His right hand thunders like ten thousand metronomes playing at once, while his crystal sheen harmonies channel the cybernetic angels of the dream-porn quire. The 4-string equivalent of Apocalypse Now!

T-Bone (Drums) – The Outlaw Groover;
A savage rock’n’roll beast. His nuclear powered beats, like the sound of distant galaxies colliding, are always delivered with immaculate precision and have been used to demolish thousands of planets. A dangerous renegade banned from several solar systems on the account of sheer decibel.

Armed with razor sharp determination and highly explosive rock’n’roll tunes, these ultimate life-forms are set to take on the world.

The SUiCiDE BOMBERS’s 12 (+2) track manifesto, CRIMINAL RECORD, was released on the 9th of June 2012. Packed to the brim and dripping with sleaze, sex, drugs and rock’n’roll, this masterpiece is everything you dreamed it would be and more. Quite literarily custom made for the never ending party …also known as your life!

History is about to begin!

…over and motherfucking out!”