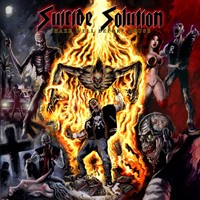 Suicide Solution was founded by Joe Suicide in the mid 90’s. The group got their moniker from the 1980 Ozzy Osbourne classic. The band is led and fronted by Joe Suicide – the group’s lead guitarist/singer, main songwriter and lyricist. Joe is the only member of Suicide Solution to be a part of every lineup. Suicide Solution is notable for being one of the longest running, critically-acclaimed metal bands from Singapore, issuing three full-length albums (The Dark Adventures, Halloween Holocaust and Shake Well Before Abuse) and performing numerous live shows in their home country.