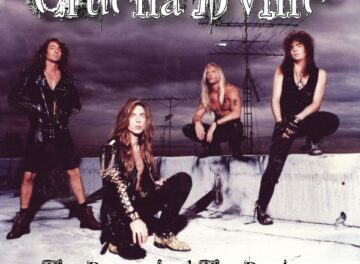 FnA Records has unearthed recordings from yet another late ’80s / early ’90s Sunset Strip band. This time around, FnA Records has released an album from Cruella D’ville titled The Power And The Passion 1986-1991, which features tracks from their early beginnings as Valentine, their 1988 EP and some of their tracks from 1991 that were never released. You can purchase Cruella D’ville‘s album The Power And The Passion 1986-1991 directly from FnA Records.

Cruella D’ville were Rocking Tampa and gaining exposure, and they decided L.A. is where they needed to be – part of the huge metal scene that was exploding there in the late 80s.

In 1988, Juan Croucier, the bass player from Ratt heard a Cruella EP and expressed interest in producing a new project for the band.

Cruella started gigging in LA at the Troubadour, the Whisky, Gazzarri’s, FM Station and many other venues. They got a weekly gig at the Troubadour playing every Wed night for over a year in 1990 at the Jon E Jam. Cruella D’ville became a big draw on the ‘Strip‘ packing the Whisky and Gazarris.

The band was featured in all the local magazines, such as Rock City News and Screamer.

Eventually a distribution deal was signed with Big Time Records to distribute the 1988 EP through magazine orders, while the band sold tapes at the shows, and local record stores.

The band was then approached by a record company which shall remain unnamed and signed a deal to record an album. They continued to gig and write songs for the album. When all the preproduction was complete they recorded 11 songs for the album. There was a falling out with the record company and the album never got released.  This is where FnA Records picks up in 2023 and releases a Retrospective of tracks recorded from 1986 (when the band was called Valentine) to the last recordings in 1991.

The CD is a 19 track roll through 1986-1991 featuring bits and pieces from all the stages of their career. The earliest of tracks on this release are from 1986 when the band was called Valentine. Also included are the 1988 EP and Demo Tracks from the same period. Lastly are some of the best tracks the band ever wrote and recorded – the 1991 studio tracks.

The album is available on silver pressed CD, CD Fan Packs which are autographed, and digital download through the website.”